The Tribes of the Hordelands

The Orcs and the People of the Hordelands

One would be surprised that the people of the Hordelands, the orcs and the humans and some wild elven tribes, still live at a more primitive level than those of the Known World of Man, or the Elven Kingdoms.  This is a result that the terrain is wide open and much more harsh than what would have been guessed.  The land was never conquered, and in the Orc Wars past, never been proven to be conquered.   The people could never adopt the civilized ways of Man or Elf.

The tribal society of the orc people is composed of four types of people: princes or chieftains, bondsmen, and thralls. The basic social organization among the tribe is the bro or the extend family group, who live on the common land called the tref.  The orcs have organized these trefs into larger groups, which they call commotes.  Greater still are organizations called cantrefs which is the equivalent of a dukedom or a small tribal kingdom.  Commotes and cantrefs are ruled by a tribal cheiftain.

Many times in the history of the Orcs, did the Silverfangs came up against them.  And the battles have created firm boundaries.  The people in the Central and Western Hordelands tend to be independent and strong.  They are less civilized, and only in the halls of the High Queens and War Chiefs can one find living standards that are comparable to those in human cities.  Anything like chivalry is practiced by an elite few; the majority of the population are wild Heathens living in tune with nature. 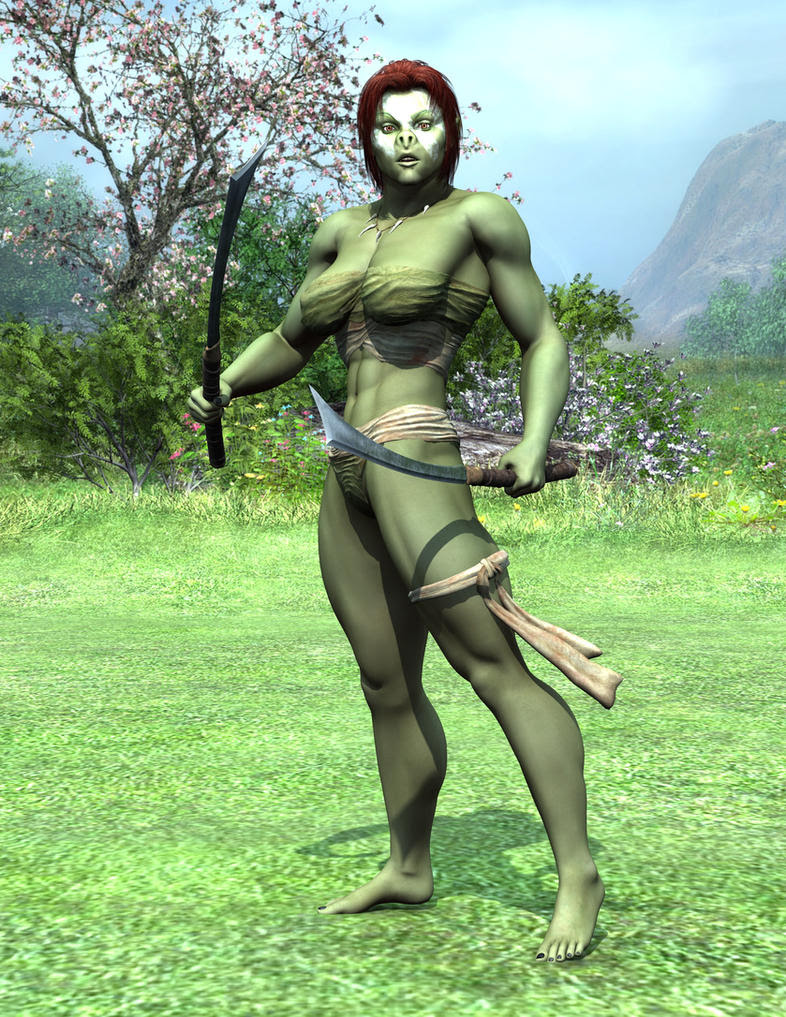 Orc society is similar to other tribal societies in a lot of respects. Their day to day life differs little than that of other heathen societies. However, their culture is unique among the nations since they hold orc women in higher esteem than men.  Inheritance among the less civilized orc tribes is matrilineal, that is property is passed from mother to daughter instead of father to son; with a son being considered only if there are no female kin.  Orc women rule deep orc society at all levels.  Although Orc Men are as proud and able as men in other cultures, but alongside them the women enjoy higher status. Hence, many women hunt and fight as well as the men, and many men can cook, sew, and forage as well as women.  Although there is some specialization, but any individual can fill the roles that are traditional to tribal life.  Although clans like the Desert Vipers, the Silver Fangs, the Shadowclan, and the Blood Talons are patriarchal in nature; clans like the Humble Bear, the Silver Badger, and other clans are matriarchal in arrangement.  this arrangement can be confusing to visitors from other lands.  Great care must be taken to ensure the proper respect to the orc women of the Hordelands.

The orcs are well versed in their own histories.  They can trace their ancestors right back to their native world and beyond.  These ancestors can be contacted by the tribal shaman.  The ancestors can often give advice and insight in times of need.

The Orc clans of the central and western Hordelands are similar in many ways to the tribes of their native lands.  They were formed by the leaders of the first orcs, each given a portion of the land divided up to them by the leader Durotog.  Durotog also taught the orcs the lore of arbitration, politics, leadership, nobility, and warfare; which are still passed from generation to generation till today.   The orcs are not all of equal standing, however.


Elf Hunting by ~Spike4072 on deviantART

The most important rules over the whole clan, whether it be a he or a she.  So, her or his most important relations manage the fortifications and their attendant populations.  The more distant relations rule over smaller areas, such as a town or a village. Orcs have a number of freemen who are masters of crafts: such as blacksmithing, jewelrymaking, fletching, bowmaking, pottery making, wolf breeding, raptor breeding, and other crafts.  The queens and chiefs oversee laws and dispense justice through a mixture of tradition and diplomacy.  However many of the common orcs disagree with the rulings.  Although it might be peaceful in the Bloodtalons and the Silverfangs' ruling halls, in other places there can be disputes over the pronouncements of the chieftains and the queens.