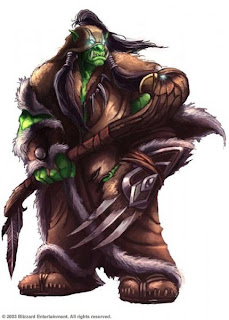 Orc society are an animist society that does not worship an actual deity, but venerates many spirits -- ancestral spirits, animal spirits, plant spirits, elemental spirits, and so on.

The Wise among them are not witches, nor warlocks, but people called shamans.  Shamanism among the Orcs is also called Heathenism around certain circles.  Shamans guide others in their spiritual matters and act as a bridge from the physical world and the spirit world.  While seemingly serene, the shaman can unleash the power of his totem spirits.

The Shaman is a variant of the cleric.  A variant on this class is perfect for low magic campaigns, see the Genius Guide to The Shaman for details, and here for the OGC.

Starting Wealth: 4d6 × 10 gp (average 140 gp)
Class Skills: The shaman’s class skills are Appraise (Int), Craft (Int), Diplomacy (Cha), Heal (Wis), Intimidate (Cha), Knowledge (arcana) (Int), Knowledge (history) (Int), Knowledge (nature) (Int), Knowledge (planes) (Int), Knowledge (religion) (Int), Knowledge (spirits) (Int), Linguistics (Int), Perform (ritual) (Cha)g, Profession (Wis), Sense Motive (Wis), Spellcraft (Int), and Survival (Wis).
Skill Ranks Per Level: 2 + Int modifier.
Changes:
Spontaneous Casting: Good-aligned shamans can spontaneously cast cure spells, while evil-aligned shamans can spontaneously cast inflict spells. Neutral shamans must choose either cure or inflict spells at 1st level, and the choice cannot be reversed later.
Turn or Rebuke: Shamans can turn or rebuke elementals. At 1st level, the shaman chooses a favored
element (air, earth, fire or water): He can rebuke, command or bolster elementals of that element; and he can turn or destroy elementals of the opposed element. The opposed elements are air/earth and fire/water. For instance, if a shaman chooses water as his favored element, he can rebuke water elementals and turn fire elementals. The choice of a favored element cannot be changed later.
Domains: Shamans gain access to domains associated with their particular Totem animal.  See below.
Aura and Channel Energy is exchanged for the following abilities ---
• 1st Level—Augur (Sp): The gift of the sight is a curse for many, but the shaman has long since mastered the ways of readings omens, signs and portents. Using the skill bestowed upon him by the spirits, the shaman can see into the spirit world and prophesy. He has the ability to cast the spell augury once per day as a spell-like ability; his caster level equals his shaman path level.
Totem Animal (Sp): The Shaman gains a totem animal to guide him through life.  This is selected by the player.  The Shaman's spirit animal is his or her spirit guide through the Spirit World and can lead him to hidden knowledge.  It can also offer certain bonuses for certain skill checks.
Sample Totem Animal list --- 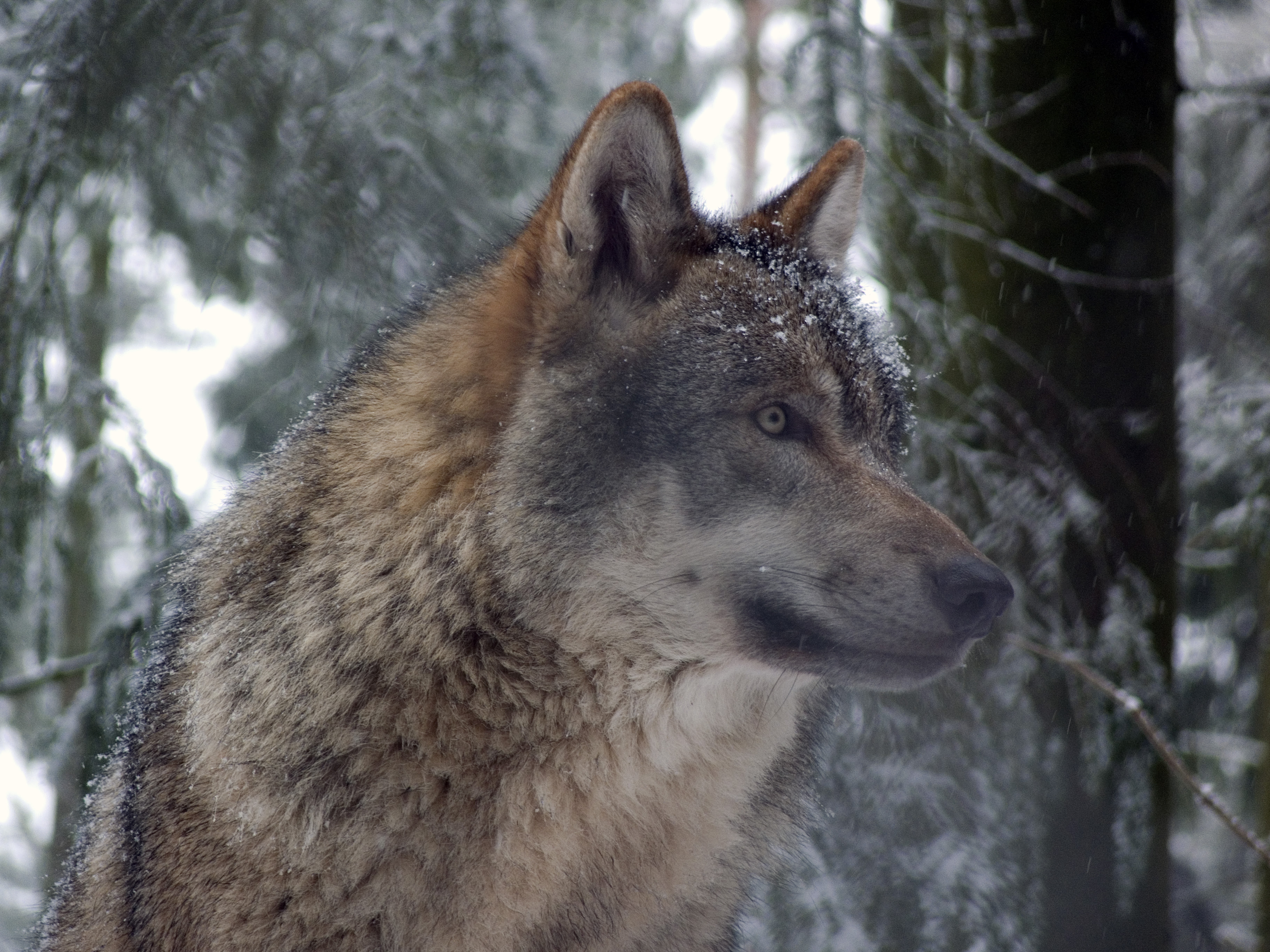 Wolf -- Wolf is the family totem, and is associated with duty towards family, their ferocity in battle, and their ability to travel.  Orcs breed and use wolves for mounts.  Wolf totems offer +2 to Intimidate and Survival checks.  Shamans who are wolf shamans gain the Community, Strength, and Travel domains.  Associated sub-domains include: Family, Ferocity, and Exploration.
Eagle -- Eagle is a leader's totem.  Eagles are associated with leadership, pride, and exaltant thoughts.  Eagle totems offer +2 to Diplomacy and Knowledge (politics) checks and also the Leadership feat.  Eagle Shamans have access to the Air, Glory, Nobility, and Travel domains.  Subdomains include: Wind, Honor, Leadership, and Trade.
Dog -- Dog is known for his loyalty to family, tribe, clan, or nation.  Dog will be loyal even unto death.  Dog totems offer +2 to Diplomacy and Sense Motive checks.  Dog Shamans have access to Community, Good, and Protection domains.  Subdomains include: Family, Archon, and Defense.

Dolphin -- Dolphins are known for their friendliness towards all humanoids (except sahuagin).  They are also well known for their sexual appetites, and will protect a man and save him from drowning.  Dolphin totems offer +2 to Swim and Perform (sexual techniques).  Dophin shamans have access to Community, Charm, Good, Protection, and Water domains.  Subdomains include: Family, Love, Azata, Defense, and Ocean.
Lion -- Lion is another leader's totem.  Lions do not compete with Eagle, but represent power, strength, glory, and nobility.  Lion is the King of Beasts.  Lion shamans gain +2 on Diplomacy and Knowledge (nobility) checks and also the Leadership feat.  Lion grants the Animal, Glory, Nobility, and Strength domains.  Subdomains include: Fur, Honor, Leadership, and Resolve.

Coyote -- Coyote, the great trickster.  Coyote is independent and typically does anything it wants.  Coyote grants +2 on two skills of the Shaman's choosing but the Shaman must be Chaotic in alignment.  Coyote grants access to all the domains but no sub-domains.  Favored weapon is the Shaman's own choosing.
Snake -- Snake is a healer's totem rather than a fighter's totem.  Snake shamans are expert healers, and are typically very wise.  Snake offers access to the Good, Healing, Knowledge, and Scalykind domains.  Subdomains include: Azata, Thought, and Restoration.
Dienonychus -- also called Raptor or Carver, Dienonychus is a pack animal that is incredibly clever.  The dienonychus are superb hunters and are typically maintained by orcs for taming purposes.  Dienonychus offers +2 on perception checks and the track feat.  Dienonychus offers access to the Knowledge, Scalykind, and Travel domains.  Subdomains include: Memory, Saurian, and Exploration.
• 4th Level—Flametongue/Frostbrand (Su): A shaman learns to capture an elemental spirit within a weapon he wields. By sacrificing any prepared spell slot of 1st level or higher, a shaman can imbue a weapon with either the flaming or frost special weapon properties. A weapon cannot bear both elemental weapon properties at once, and it loses its special property if it leaves the shaman’s hands.  A shaman can imbue a weapon this way once per day. Doing so is a standard action that provokes attacks of opportunity. The property lasts for a number of rounds equal to 1 + his Spirit modifier (minimum 1 round). This property can be suppressed for 1d4 rounds by a dispel magic targeted on the weapon. The shaman gains an additional use of this ability per day at 8th and 12th level.  A flaming weapon deals an extra 1d6 points of fire damage on a successful hit. A frost weapon deals an extra 1d6 points of cold damage on a successful hit.
• 8th Level—Ghost Totem (Su): The shaman gains the ability to turn himself into the animal of his totem with a ghostly white appearance.  For instance, if his totem animal is a wolf, he turns into a wolf with a ghostly white pelt. This ability functions like the polymorph spell, except as noted here. The effect lasts for 1 hour per shaman level, or until the shaman changes back. Changing form (to animal or back) is a standard action and doesn’t provoke an attack of opportunity.
• 12th Level—Purge (Su): The shaman has learned how to snuff out the threads of magic that fuel spells empowering other creatures. The shaman can make a dispel check (1d20 + shaman’s caster level, maximum +10) against any beneficial transmutation spell currently in effect on a target (e.g., bull’s strength). The DC for this dispel check is 11 + the spell’s caster level. If the shaman succeeds, the spell is dispelled; if he fails, the spell remains in effect, and the shaman cannot make
another purge attempt against that specific spell (though he can attempt to dispel other transmutation spells in effect on a target, if any).
• 16th Level—Rebirth (Su): By sacrificing a prepared spell slot of 5th level or higher, the shaman can bring a dead comrade back to life. This ability functions exactly like the spell resurrection, with the following exceptions. The slain comrade cannot have been dead for more than 8 hours and must have the same affiliation or alignment as the shaman. A shaman may do this once per day at 16th level and twice per day at 20th level.
-----------------------------------------------------
Shaman Spells.
Shamans depend on an entirely different spell list than the Cleric.
----------
OGL section 15:
World of Warcraft Roleplaying Game.  Copyright 2005 by Blizzard Entertainment
More Magic and Mayhem. Copyright 2005 by Blizzard Entertainment.
Pathfinder RPG Core Rulebook. Copyright 2009, Paizo Publishing, LLC; Author: Jason Bulmahn, based on material by Jonathan Tweet, Monte Cook, and Skip Williams.
Posted by Elton at Thursday, May 26, 2011