There was something interesting while browsing a Hindu board that came up:

"If yes, I see a big problem. If Jesus Christ is "kalki" then only Christians can go to heaven and be saved from hell-fire. What will happen to all the non-christians such as Hindus, Muslims, Buddhists, Sikhs, etc. Will they be condemned to hell for eternity because they did not believe Jesus was the Son of God and died for their sins? Then God would not be fair right? What do y'all think?" 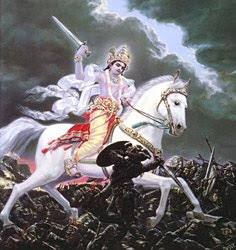 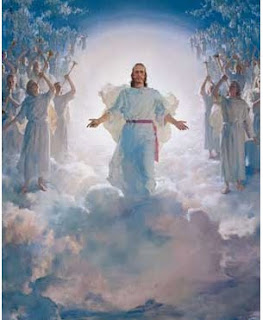 Christ as Kalki?  The parallel has been explored before.  Kalki is a Messianic Figure in Hinduism.  Kalki is an avatar or incarnation of Vishnu that is supposed to come at the end of the Kali Yuga and wipe out the evil that is on the face of the Earth.  Jesus Christ as the Messiah is what Christians know and believe, and Messianic Jews (a faction in Judaism that has been gaining a lot of attention and is growing) have come to realize.

There are some striking parallels between Kalki and the Messiah.  For instance:
* Both would be preceded and accompanied by Fire.
* Both used the White Horse symbolism.
* Both will defeat Evil.
* One of the preceeding signs is great wickedness.

All of the Signs preceeding the Second Coming are these:

But to answer the question of the Hindu who asked.  Christ will save the more righteous of the people.  This means all people: Buddhist, Hindu, Jain, Muslim, Christian, Pagan, Wiccan, Shinto -- all who are righteous and follow the Spirit or the teachings of their good and just ministers of their faith, will be saved. :)

According to some , the four horsemen precede the second coming, therefore, none of them are the Christos. Christos, the Lamb, is opening the seals while the visions of the horsemen are revealed, therefore the Lamb can't be any of the horsemen.

The rider of the white horse is mistaken for the Christos, but he is not but an impostor. Take in mind this rider, just as the other riders, is given a right, in his case the right to conquer.

The Christos doesn't need to be given any right to conquer, as he has already triumphed over death (death is another horsemen, you see). There are also differences in how the white horsemen in Revelation 6 is described, opposed to the Christ in Revelation 19. Not to speak about etymological nuances of the different kinds of crowns they wear.

hey there, i totally understand what your saying.
if you look at it in a way, all religions seem connected in a way. i feel they all depict the same person, or event, just in a different way. there must be just one god, who is called different things. and i think you have one thing confused.
when you say Hindu's believe that "kalki" is Jesus. i think you have a misconception
i am a devoted christian but,
Hindu scriptures date about 2000 years before the bible was created.
so i believe you should re state your statement as christians believe that kalki is actually christ.
it is already writen 2000 years in the veda's before the bible that this man with a horse and knife will come.
so please, understand your facts properly, and then write.
don't write with religious biases in mind.
who ever is right, it doens't matter because if the saviour is actually god then, he/she should have the courtesy to save all religions. saving one religion and not the other, is no different than discrimination. if "jesus" or kalki is the real god, then the results should only be based on whether you have been a good human being.

I believe? there are is a presence of such a phenomenom as "borrowing". It's not a secret that people would cross borders and travel, even in those times, hence perceiving new knowledge, historic or linguistic, cultural, customs and so forth..... and we know that apostles we travelling, as well, spreading the word of thruth, so someone from asian part just perceived this knowledge and transformed it into that form, which will easily accepted by the people, who grew in specific kind of cu;ture, traditions, with their certain believes and mode of life.this is it. So there are NO 2 gods, there is 1 (Jesus), seen/perceived in different ways, basing on the knowledge that has been "travelled"/spread across the different countries.

If Jesus is Kalki then, according to bible when he is expected to come to the earth? According to Hinduism we have to wait more than 300,000 years more.

If Jesus is Vishnu avatar, then it is against Christianity and all Christians should get converted to Hinduism.

I started life as an earnest Christian in the West and then immigrated to India where I have studied the Hindu scriptures for many years. One of the things that has struck me is that people are mistaken if they think that they can take the superficial meanings of scripture as literally true and complete. There are many hidden meanings in scripture that were known by all in the past, but gradually, the method of obtaining these hidden meanings from the Sanskrit texts has disappeared. As I am not a Sanskrit scholar, I would not like to chance giving my own interpretations. But as a general statement, I believe that Hinduism and Christianity have many ancient connections and that Jesus and Kalki are the same being. I recently read an account of the 'mahaprakash' of Caitanya Mahaprabhu in Bengal. During this incident Mahaprabhu revealed himself to his devotees in whatever form the devotee worshipped i.e. some saw him as Narasimha, some as Ram, some as Krishna etc. In the same way, when Jesus/Kalki comes, he will reveal himself as Jesus to the Christians, Kalki to the Hindus, etc. God is One and in fact, all the religions of the world have a common base. I believe that the vast number of years that are said to be left before the coming of Kalki is in fact a coded figure. My personal belief is that we are now in the last days, and it is possible that Kalki/Jesus is already on the earth. From a scientific, political and dharmik point of view (i.e. dharma has disappeared in large parts of the world), the world is headed for imminent disaster. I believe that the Kalki/Jesus avatar is a compassionate avatar and will endeavour to save as many people as possible from the oncoming destruction through widespread preaching of God's Name and glories. All the scriptures of the world preach the sanctity of God's Name and whatever Name people use to call upon God, he will answer. Just as Krishna destroyed the Kurus by glancing on them while acting as Arjun's charioteer, so Kalki will destroy the evil and debauched powers - not by violence - but by his glance. In fact, just as the Yadavas self-detroyed each other at the end of Krishna lila, so the powerful and degraded rulers of the world will self-destroy each other at the end of this Age. The time is ripe and many of the prophecies listed in this article have already been fulfilled. Its an interesting topic and these are just a few of my 'educated guesses'.

You are seeing materialistic part of Lord Vishnu..what he said in Bhagavad Gita is that it is the sole that matters....So incarnation is the soul of the God not God himself....So that doesn't matter if its Lord Vishnu or Jesus

Vishnu is the god of stabilization (Preservers). He would oppose chaotic changes in life.
Vishnu is the only god who reincarnates and thus enables us to have many kinds of life styles
Vishnu is made of both automatic and manual forces in equal magnitude and gives us the ability to do two things at the same time.
Vishnu gives the ability to think and act with equal ease.
It is at the stage of Vishnu that an idea becomes an action and an action becomes an idea.
Vishnu makes all the ideas and activities of our life compatible among themselves.
Being the central of the seven basic Hindu gods Vishnu gives us a glimpse of six other gods. Thus, Vishnu is often considered as the supreme Hindu god.
Vishnu is the purifier of life. Vishnu symbolizes water. Thus, we symbolically immerse ash, Vinayaka and Durga idols into water

kalki will come not jesus. lord vishnu take 24 incaration in different yugas and tell me how many times jesus incarate.how jesus comes from india as in kalki avataar how??? what the rubbish is this jesus power have limits but lord vishnu power have no limits he is immortal
not like jesus. second comming of jesus is rubbish human can not take incaration l

jesus christ is the incaration of lord vishnu