Nations of the Humans: Devonshire 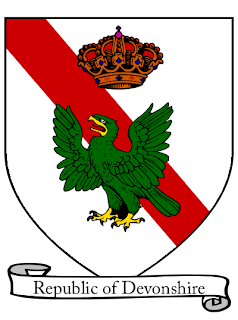 Founded out of Caithness during the Religious pogroms of pagan, new age, and atheistic peoples; the Republic of Devonshire included the Shires of Nottingham, Devon, Carlisle, Cambridge, and Lancaster.  The event happened 300 years ago, and the people have kept their Republic from the Caithness Monarchy or enemies within ever since.

The Shires were divided into twelve new shires, each named after the tribes of Israel: Judah, Ephraim, Manasseh, Benjamin, Zebulun, Reuben, Asher, Simeon, Dan, Naphtali, Gad, and Issachar.  The Thirteenth tribe of Levi isn't represented as a shire in the republic.  The Senate is composed of twelve Senators, one from each Shire.  At the head of the Senate sits the Prince, who acts for the Executive branch of the government.  Usually the Prince is the representative from Judah, but sometimes a Senator from Ephraim is appointed.  The government is run by Parties -- the Parties include the Moroni Party (Pro-Liberty), the Judah party (Conservative), the Ephraim Party (Liberal), the Gadianton Party (Pro-Totalitarian), and the Neutral Party (Moderate).  The politics swings from these five parties at any given time.  Politics in Nottingham is brutal, the phrase -- "Watch your back, Jack" is truer than ever.  The Republic of Devonshire maintains an Army, a Navy, and colleges.

Since its founding, the Republic of Devonshire has faced incursions from the Blackrock Orcs across the border and from the swamps.  The Republican armies have managed to defeat both tribes of orcs who did not join the Horde, but never conquered them.  It isn't the Republic's way of doing things.  Through the years, the humans have had a mixing of orcish blood into their ancestry, which has affected some of the population.  Caithness has tried to invade Devonshire more than once and each time it has retreated with it's tail between it's legs.  Northumberland tried to invade by sea, and has even occupied five of its shires, but was defeated.  The only time the Republic has been humbled was when Angland invaded on a Religious Crusade.

This happened sixty years ago, when the Navies of Angland conquered the former capital of Devon and burned it to the ground for being full of Christians.  The paladinic Order of Light was founded just ten years after that, but not after the Church of Light was spread over the Republic and made the official religion.  However, five years later, the Devonshirites kicked out the Anglish with an Army of just three hundred.  In a battle akin to the Battle of the Midianites in the Bible, the tiny army of 300 citizens managed to confuse the Anglish Camp and made their enemies slay each other.  Any Anglish left in Devonshire were given the opportunity to become citizens of the Republic or die.  Many of the captured Anglish have accepted.  The Republic has been refounded based on Laws of Justice and Order since that time and the Knights of the Light (the former Anglish) have been protecting the Republic from enemies within ever since. 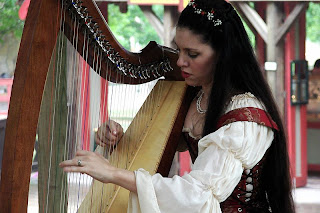 Life and Society
Life in the Republic is based on freedom rather than slavery.  The people enjoy rights to free speech, freedom to assemble, and the freedom of arms.  They are also free from invasion without warrant, and many other freedoms.  The Republic is represented by twelve Senators from each Shire in Nottingham and has been founded and refounded.  The Senators make new laws and often represent their parties.  Currently the Judah Party holds the Princely Seat and the majority in the Senate.  There is only one Progressive so far in the Senate and he is hoping for his turn on the Seat.

The People believe that they are the Spiritual and Political descendants of the Twelve Tribes of Israel. They have freedom bred into them from 300 years of attaining it and keeping it.  Most citizens of the Republic are farmers, ranchers, foresters, or craftsmen.  The Republic maintains a citizen army.  Every citizen is a part of the army.  Besides the Army, an order of paladins called the Order of Light act as leaders, generals, heroes, and watchdogs of the Republic from its enemies within (which are either Orcs or Radical Revolutionaries).

Carlisle Lake:  This lake is in the heart of the Republic.  There are about five castles surrounding the lake dating from Monarchial times.  Three of the castles are well maintained while the other two fell into disrepair.  The lake is a huge freshwater lake and it is a quiet lake.  The city of Carlisle is located on the western shores of the lake. To add mystery to the lake, Lake Carlisle is rumored to harbor lake monsters.  Castle Hart is controlled by the Blackrock tribe and Castle Norrington is mainly abandoned because of rumors of being haunted.

Shadow Wood:  This forest acts as the border between Caithness and the Republic.  It's a thick forest, only the Devonshire side has become black and darkened thanks for the old growth trees that are in the heart of it.  Lately the forest has been advancing and the settlers on the border have been complaining of ghosts, werewolves, and other supernatural occurrences.  Lately, some people have reported talking and moving trees. 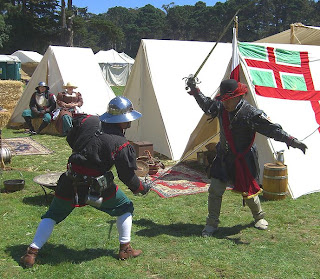 The Heart Plains: Light forests, rolling hills, and cultivated land make up the Heart Plains.  The land is mostly maintained by farmers but the light forests are used to make sure that the soil stays in place until the land is ready to be cultivated again.  The Heart Plains are carefully managed in a rotation cycle.  Aside from the gnoll brigand tribes that are scattered about the place is peaceful.

The Swamps:  The Swamps is a dangerous place since it breeds biting insects.  It's also the home of trolls and ogres.  The monsters leave the humans alone that live near the swamp, but sometimes something worse comes out of the swamp and adventurers often go in to get it.  No one knows what is actually happening in the swamp when a monster that comes out of it is often a frightening amalgam of several creatures (so far a Hydra, a chimaera, an echidna, and other nasty creatures have come out of the swamps).

(Next: Important Sites, Regional History, and Plots and Rumors)
Posted by Elton at Wednesday, April 07, 2010