Are the Mayans the Nephites? 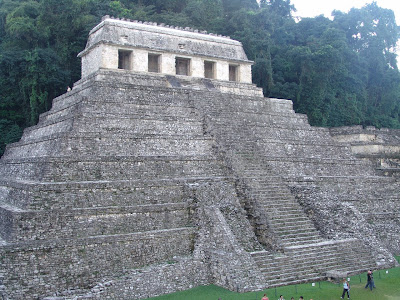 Traditionally, my people the Latter-day Saints have convinced themselves that the Toltecs and Mayans were two ancient civilizations: the Jaredites and the Nephites. However, the ancient documents that the Mayans wrote in their distinctive glyphic writing bears no resemblance to any thing that the Nephites could have wrote since the Nephites bear claim that they reformed the Egyptian writing system to their language.

To make a claim that they are is ludicrous because the writing system of the Maya bears absolutely no similarity to Demotic. 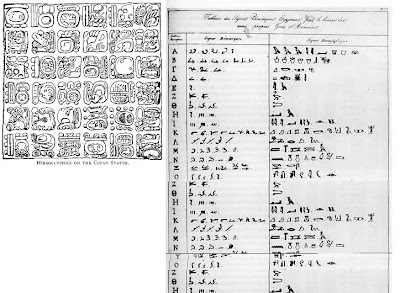 As you can see, there is no similarity. Nephites in Middle America is just something that can't be done. However, it is possible that the Nephites lived somewhere else . . . But not in the Yucatan Pennisula. It's just not possible that they'd live there. Further proof that the Maya could not be the Nephites is presented in this Nova Program:

So, who are the Nephites? With the time we have, we will never ever find out to everyone's satisfaction as to who they are. The Nephites -- a Christian civilization in America whose record was recorded on gold plates and translated by Joseph Smith into the Book of Mormon -- will be a mystery to Archaeology for a long, long time.
Posted by Elton at Wednesday, October 07, 2009

There is a lot of evidence that the Nephites lived in southern Appalachia at one time. The Bat Creek Stone (found in a Cherokee mound in TN in 1834) is written upon in what resembles the "Reformed Egyptian" in which the Book of Mormon was written. Look up Bat Creek Stone images on Google.

There were similar engravings found on the Hooper farm in Bradley Co., TN in the 1890's; (look up Hooper Farm Mystery on Google).

There is also a stone fort-like wall built atop Fort Mtn. in Chatsworth, GA. The Cherokee legend said that it was a defense built during an ancient war between "red Indians", and "white, blue-eyed Indians."

To my eye, the Mayan art and architecture, and the Mayan people to a lesser extent, look far too similar to those of the cultures of Cambodia, Thailand and the Malay region.

As Lehi's people enter the promised land, Nephi lists the animals he sees (1 Nephi 18:25), "both the cow and the ox, and the ass and the goat and the wild goat..." Pronghorn sheep, Dall sheep, bighorn, mountain goats, bison, musk ox, all of these could be reasonably construed to fit into those categories. What scant evidence biological exists that the horse was never extinct in the Americas, exists in North America, not Central, not South. Other than "the ass" I don't know of any of those indigenous animals who do well even in the southern part of North America.

In the Bible, when a 'sea' is named, it is usually a large lake, not a large gulf or an entire ocean, as the common Central American geographies for the Book of Mormon suggest.

Lastly, to my mind, the idea that the hill we know as Cumorah was named after some far away place where Moroni originally stashed the entire history of his civilization, and that he, in fleeing his genocidal enemies, traveled all the way there with all of that stuff... all the way from some other hill in Central America? Try walking that distance without all of that stuff.

Also, the Cherokee claim that their written language traces to a small group of 20 or so refugees from a war-destroyed culture who had joined the nation generations ago and brought with them their written language on a set of thin gold plates. Their system bears a very striking visual resemblance to ancient Hebrew.

Try to get a copy of a book by Traveller Bird, _Tell Them They Lie_, which refutes everything we have in our history books about the Cherokee, and details the account of the refugees who later formed Scribe Clan and were the sole keepers of their written history until it was determined that it was time for all the Cherokee to learn to read and write their own language.

Anyway, North America, the East, probably starting in the Great Lakes area (a more reasonable collection of bodies of water to be called 'seas')and heading down into the Cherokee lands, seems a much more likely place to me to be looking for tangible evidence of the Book of Mormon.

Personally, I think all the excitement about Central American civilizations was infused into the early members of the church because those findings were young and exciting at the same time the church was young and exciting, but after Joseph Smith was gone and was not there to say, "What?! Two Cumorahs? That's just silly." It's become tradition that many believe is doctrine.

Oh, you might also note the appearance of traditional Cherokee dress as opposed to that of other indigenous cultures of the Americas? Who else wears turbans?