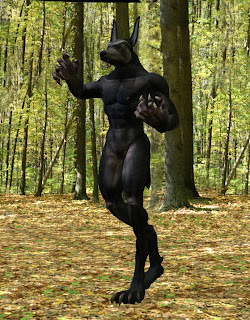 Because of my exposure to gay men on World of Warcraft, and attracting an admirer who is also gay; I am seriously of thinking of doing a gay superhero. Perhaps the second so conceived for an American audience -- as Stan Lee designed such a superhero before I did. Why do such a thing, you ask?

I think, as a Mormon man, I live in a culture that does think that homosexuality is wrong (in fact, it is, since the LDS religion is all about being or becoming a Creator). My take on homosexuality is, yes, it is wrong. But, the feelings that homosexuals have for each other are not wrong. I don't know what Mr. Lee is planning with his gay hero, but I hope to tone mine down in expressing his feelings.

In short, he won't be aggressive. He will show all the heroic attributes of a superhero, except he's a homosexual. He likes men more than he likes women and he sees men as romantic or sexual partners. But he isn't aggressive about it. He would be like Alele from the El Hazard: Wanderers T.V. show -- a passive gay who admires male beauty. "He's beautiful," he'd remark to himself. I do believe that American comics is ready for a homosexual character who is superheroic. Only in this case, he's a werewolf -- or in the case of Raymond Drake -- a werejackal. Being part animal does provide a problem, but since my hero does talk, he's a lot like the Astounding Wolf Man by Robert Kirkman. One problem is: what happens when Raymond Drake approaches the person he has feelings for? One of the best things about working with Image that I might be able to get away with an affectionate scene between the two of them (not full sex, but an affectionate scene).

Raymond Drake is loosely based on the young man behind the Blood Elf mage Reiadryn on WoW, the young man who has "fallen in love" with me. Which is something I don't fully understand why. Fortunately, I totally accept him. But I don't see a future with him.
Posted by Elton at Sunday, October 11, 2009

There's quite a few gay superheroes flying around nowadays. Far and away the coolest is Midnighter who is in a relationship with Apollo in Wildstorm comic's The Authority series.

They're similar (on the surface, at least) to Batman/Superman but the friendship is much, much deeper and has turned to love. There's the dichotomy of Apollo being a creature of a sun and Midnighter being.... well, the name gives it away, I guess. The fact they're lovers gives them an emotional depth (in part, due to brilliant writing from Wildstorm) that you'll rarely find in a superhero comic.

Well, they have an openly gay relationship. I'm not going to do that, though. Although, like I said, the feelings they have between each other isn't wrong.