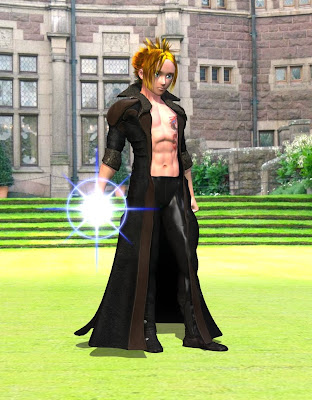 Meet Major Elric "Hannibal" Smith, State Magican. This is a 4th Edition wizard for the game over on Myth Weavers. I was invited by Greywulf, so I chose to take the invitation.

Time Period: Victorian England
Race: Human
Age: 17.
Country of Origin: Roshtaria
Rank: Major in the Roshtarian Army
Storyteller/Actor Role: Combat Mage (Medium Artillery)
Gamist Role: Controller
Class: Wizard
Distinguishing Marks: There is a tattoo of an Oriental Dragon on his left side, it snakes around his left nipple and down his ribcage to his stomach.

Talents: Elric has the following talents ---
* Battle Reflexes (Minor Special Training Talent) -- Elric is capable of making an extra initiative roll, and I may select the one I wish to use.
Elric can adapt to any combat situation quickly. He can assess the whirlwind of information that assaults him in combat. He knows how to use that information to his own advantage, and he presses that advantage when ever he can. Even if he is surprised, he can recover more quickly than normal. Then he can press the battle to his victory -- a result of his military training.

* Natural Physique (Minor Physical Talent) -- This talent reflects the increased hit points found in 4th Edition.
Elric was born with a natural physique. This allowed him to have a well developed body, which was honed in Military basic combat training. As a result, he has a well defined muscular body.

* Danger Sense (Major Mystical Talent) -- You may make an Alertness check to detect danger (DM's Discretion). Elric receives a +2 bonus to make the check.
Whenever Elric gets close to a source of danger, he can feel it. He cannot always depend on it, but has certainly saved his life on more than one occasion. He keeps it a secret because people don't believe he can sense danger. He does use it to his advantage, however.


* Military Combat Mage Training (Greater Special Training Talent) -- This talent is a catch all, representing the skills and powers he receives under 4th Edition. It also represents the Gamist emphasis of D&D 4th Edition.*

Flaws/Defects:
Rival NPC (Greater) (Balances Military Combat Mage Training) -- Elric has gained a rival in the Roshtarian Army, another State Magician. This one is a Heavy Artillerist or Nuclear Mage, specializing in powerful destructive magic (just like Kimbley from Fullmetal Alchemist).
Elric has a powerful rival. Once they were the best of friends, but they drifted apart. During the battles they participated in -- this rival was getting increasingly unbalanced and focused on magic that destroys things in a wide area. The final break was during the Battle of Ashvale, when his friend used powerful magic that obliterated about five city blocks and killed hundreds of innocent non-combatants. And all the time, he laughed and grinned the grin of a sociopath. They split and he was never seen again. However, Elric knows that he's out there, up to no good or trying to surprass him in skill.

Girl/Guy Magnet (Greater) (Balances Danger Sense) -- Elric attracts both girls and guys who are easily distracted. Some want to pursue a romantic relationship.
Elric is quite the lady killer. Girls find him physically attractive, and they swarm to him like bees to honey. But that's not all. Some guys are attracted too. It's very embarrassing for Elric to attract girls, but guys?

Sense of Duty (Minor) (Balances Battle Reflexes) -- Elric is a Major in the Roshtarian Army, and thus he has a duty to return to Roshtaria as soon as possible and resume being in the Army.
All mages - both Combat and Nuclear - in the Roshtarian Army are given the Rank of Major, since there are few of them and their talents are invaluable in military operations. Although Elric has a standing order to capture his Rival, he feels a strong sense of duty to his country and to the Army.

Chivalrous (Minor Flaw) (Balances nothing) -- Elric must fight in an honorable and chivalrous manner, since he ascribes to a code of ethics that is based on doing what is honorable and right. He will always fight fair and treat ladies with respect (which intensifies his Girl/Guy Magnet flaw).
There is much honor to be gained, and Elric lives for such honor. Elric endeavors to receive the most honor possible in ensuring a fair fight. He doesn't take advantage of an unarmed foe, attack people from behind, or attack on horseback if your foe is not himself mounted. He does not get satisfaction from defeating people dishonorably. He realizes that not everyone fights by reasonable rules, however he choses to do so since it is how he was raised.

Elric was born seventeen years ago. He was born to a wonderful father and mother. He has six siblings, four sisters and two brothers. However, his father was a Combat Mage in the Army, and so he disappeared one day, abandoning his family on a Military Mission. His mother was left to fend for her seven children by herself.

Of all his siblings, only he was interested in following the footsteps of his father. His sister, Gloria Smith, studied Automail engineering and works on creating Automail prosthetics (Cybernetic engineering). While his mother tried to prevent him from becoming magician, Elric was determined to try.

Tragically, when he was fifteen, kobolds attacked his family farm and beat up his brothers and raped his sisters. The kobolds raped his brothers as well. Afterwords, the kobolds razed their crops after taking what they wanted. His mother ran away with his youngest sister calling for his help.

To defend his property, he used his magic powers. The battle was long, but with help from the Colonel and his teacher, he routed the kobolds and killed their leader. In recognition to this tragic event, the Army came to his door and recruited him into the Roshtarian Army. They gave him the rank of Major and had him go through intense combat training.

The training toughened and strengthened his body. He also learned from the best teachers the Army had available to hone his skills. It was at this time he met his Rival -- Jones. Jones was too frail for combat training, so he took nuclear training instead. They became the best of friends through their training. Helping each other out, and teaching each other basic tricks of both nuclear and combat magic. They even had bunks together, and stayed in the same unit when they shipped out.

Adventure History:
Some of Elric's Experience come from battle experience. At other times, during adventures at peacetime.

The Battle of Sorry River (levels 1-2) -- This was a major battle against orcs that invaded Roshtaria. Assigned to the same unit, Major Elric Smith and Major Jones worked together on this one. The Battle took place at Sorry River, Major Jones' home town. The orcs were insistent, they invaded and was killing everyone. The soldiers opened fire on the orcs, using their rifled muskets to take out their enemies. The battle was not going well, so General Windside ordered the Artillery. The Combat Mages and Nuclear Mages took the field.

Elric used his magic to take down the orcs, and his friend Jones, used his magic to cause a wide range of destruction. Elric and Jones separated, however. Elric used his chivalrous manner to fight the orcs, and was soon up against an Orc shaman named Narghaash. The fight between them took a long time, and finally Narghaash was worn down and yielded. Elric was impressed that the orc actually fought Honorably. Narghaash was also impressed by Elric's Chivalry. Elric let Narghaash go, but the Orc swore a life debt to Elric and the two became true friends.

For Jones, however, it didn't go well. In the battle's aftermath, Jones found his mother and father and his siblings both killed by orc axes and his house burned down. He screamed in a fit of rage and used his magic to OBLITERATE the entire Orcish command in a powerful firestorm. As the chieftains burned in his magic, Jones snapped and laughed through the burning -- enjoying the death of the orcish leaders -- able to take satisfaction in the killing of the chief and sub-chiefs that led the orcs in the battle. Elric was horrified at the true colors of his best friend; and Jones was tried and finally imprisoned for insanity.

The Homonoculus Affair (Levels 3-7) -- Roshtaria was finally at peace, and through Elric's rapport with Narghaash; Roshtaria was able to negotiate a peace with the orcs and recognition of their nation as a power. Through the intervening years, Roshtaria was forced to deal with a crisis not without, but within. In a series of mysterious happenings, inside battles, and political manuevering; Elric worked hard to help the Army overcome a crisis in his own nation.

Battles, politics, and subterfuge all took their toll. Homonoculi was seen, humans transmuted using Alchemical Ritual Magic. The Homonoculi worked their own agenda. Eventually, the homonoculi were defeated and the man who orchestrated the affair -- which almost became a coup, was Elric's own father. Elric's father was then executed for committing conspiracy against the State. His final words gave Elric strength and resolve to face the difficult years ahead. But in the ensuing chaos, someone let Jones out of prison.

The Battle of Ashvale (level 7)-- For some reason, the Eladrin declared war on the Roshtarians during the Homunculus Affair. The Eladrin marched an entire Army into Roshtaria in an attempt to occupy it. Elric didn't take part in the battles that happened in Roshtaria, he was too busy trying to cleanse Roshtaria of traitors. He did take part in a decisive battle called the Battle of Ashvale, which was an Eladrin town.

Trying to reason with him, Elric could only see that smile. Then, blackness as the world blew up. Elric and Narghaash woke up in a hospital, most of their orcs were dead. Both Elric and Narghaash healed quickly since they only received minor burns and a bump on their heads. Elric wanted to track Jones down. Colonel Hardstreet and the commanding officer of the Roshtarian Army after the battle of Ashvale had learned of Jones' escape. He ordered Elric to capture Jones and Hardstreet gave Elric Carblanche in order to do it. This meant that Elric can operate outside the Military structure to capture Jones.

Tracking down Jones (Level 7) -- with the help of orc scouts, Elric tracked down Jones to a research laboratory in the countryside. Finding Jones inside, Jones killed the researcher and jumped in a trans-dimensional portal. Commanding his scouts to stay behind, Elric jumped into the portal himself going after Jones in an effort to capture him and bring him back to his own world.
Posted by Elton at Friday, October 02, 2009

You can. Just remember, I left out some feats.

Had a quick word with kaeosdad and it sounds like he's looking for players who are more used to playing 4e D&D for his campaign.

So sorry, but you're going to have to sit this one out Elton :(

In the meantime, I WILL generate your character for D&D for you, and I aim to get you into an online game ASAP. The wonders of 4e D&D still await you!

Somehow, I think I'll feel sad about this. Instead of choosing joy, I will feel sadness.

Oh well, it's just a game I play on WoW when I can.