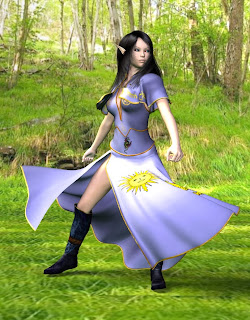 Personality: Vanyamórë is caring, brave, and speaks with the Authority of the King of Neo Massalia.

She is also infatuated with the Shaper, Michael. As a member of a warlike culture, Vanyamórë is the princess of her kingdom and thus is accompanied by a battlemage and a Knight of the Blood. However, as a Wizard, she is trained in the traditions of magic and she uses the five techniques ( Creo, Intellego, Muto, Perdo, and Rego) and the forms (Animal, Aquam, Auram, Corpus, Herbam, Ignem, Imaginem, Mentem, and Vim). She is essentially a fire mage, but she is drawn to the shapers for some reason. She wants to know why they can violate some of the limitations of Hermetic Wizardry. Another reason to meet Michael.

Despite being an Atheist, Vanyamórë has the name of God embroidered on her garment (Adonai Elohim) as well as many alchemical symbols printed on the fabric of her garment. (Sun and the Lion, the Dragon, the symbol for alchemy, the symbol for gold, and Squaring the Circle).


This is the result of restructuring my manga's genre. The conflict is between Metacreativity and both Religion and Magic. This suit is the Chaos Seed suit, but I retextured it to be satiny or to be made of cotton. It's bright blue, so she won't draw much attention to herself.
Posted by Elton at Monday, October 19, 2009