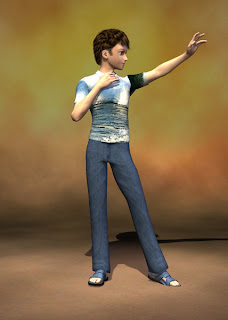 I'm working on some interesting Aloha shirt textures for the Hiro and David clothing bundles.  After getting David for free recently (I bought Hiro), I thought I'd get their clothing bundles and start working with them.  My next retexture project are these aloha shirts.  The design here is based on a surfing photo.

The Aloha shirt is a style of dress shirt originating in Hawaii. It is currently the premier textile export of the Hawaii manufacturing industry. The shirts are printed, mostly short-sleeved, and collared. They usually have buttons, sometimes as a complete button-down shirt, and sometimes just down to the chest (pullover). Aloha shirts usually have a left chest pocket sewn in to make the printed pattern continuous. Aloha shirts may be worn by men or women; women's aloha shirts usually have a lower-cut, v-neck style. The lower hem is straight, as the shirts are not meant to be tucked in.

Aloha shirts exported to the mainland United States and elsewhere are called Hawaiian shirts and often brilliantly colored with floral patterns or generic Polynesian motifs and are worn as casual, informal wear. 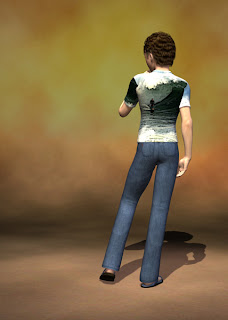 Aloha shirts, also called Hawaiian shirts, are shirts that were originally designed in the early 1930's by a Chinese merchant who sewed the original shirts out of old kimono fabrics.  The Honolulu Advertiser newspaper was quick to coin the term Aloha shirt to describe Chun's fashionable creation. Chun trademarked the name. The first advertisement in the Honolulu Advertiser for Chun's Aloha shirt was published on June 28, 1935. Local residents, especially surfers, and tourists descended on Chun's store and bought every shirt he had. Within years, major designer labels sprung up all over Hawaii and began manufacturing and selling Aloha shirts en masse. Retail chains in Hawaii, including mainland based ones, may mass produce a single aloha shirt design for employee uniforms.

When the textures are done, they will be sold on Renderosity as part of a Retexture package for Hiro and David clothing Bundles, and Aiko (4)'s cowgirl outfit by Hongyu.
Posted by Elton at Saturday, January 30, 2010