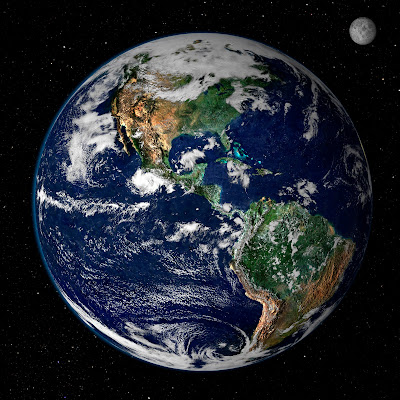 Having recently had a lesson of the creation, the first rule in World Building is this:

All worlds, whether Real or Imaginary, began as a simple thought.

A simple thought to get the ball rolling. In advertising and gamer parlance, this thought -- when expressed -- is called the "hook." (Although I'm sure its called something else to those who actually build real worlds -- Lets just call it the hook).

The hook should describe your world in one sentence, or three. The World Builder's Handbook (published for 2nd Edition) gives a lot of hooks and puts them into categories. The hook should also pull the players in to play it. Here is Galatea's hook:

Galatea is a world where an Ancient race of humans had an Interstellar Civilization that eventually fell before Illithids, goblins, and finally Dragons. Galatea was the homeworld of this Ancient Civilization. When the Earthlings came, they found a world in a New Stone Age.

From this thought, this hook, you already know a lot about the world. Galatea is the homeworld of a once proud Interstellar Civilization. The Ancients built ways to other worlds quickly and used their science to create new races from the Human Genome -> Orcs and Eladrin being prime examples. After all, how can humans interbreed with Orcs and Elves and produce children? Only if the Orcs and Elves are close enough to being human can it happen (genetic compatibility). Eventually, Earthlings did come in spaceships to escape what happened on their own world --> Earth.

See how the hook describes the world in a nutshell? From that hook, you'll know that I'm using the tools of Science Fiction and Fantasy together to build Galatea. You don't have too, of course, but that is how I approach building a fantasy world. I use both tool sets to create a rich world to play in.

As for yourself, it's kind of important to pick your tools wisely and to use them wisely. Since I'm describing Galatea as a fantasy, this means that it will be presented as Fantasy even though the tools of Science Fiction are pretty much there (spaceships, genetic manipulation, high technology, science being used to describe the world). But the tools of Fantasy are also being used liberally (magic, mythology, gods, religion, beliefs, a mystical outlook). And some tools from the real world to bring it to life (cultural analogs, food, spice mixes, and sex).

That being aside, your hook should grab your players into your world. Whether it is a book you enjoy (Thieves' World, for example); or a time you want to explore, or a situation you want to play out. Or if you want to try something off the wall. The hook is probably the most important thing you do when building a world.

And yes, for the Creator, it was different. There was no hook for us to come down to Earth given to us by the Creator -- but an overwhelming desire to progress and become like the Creators themselves.
Posted by Elton at Monday, January 18, 2010