Geeking out with Swords and Sorcery 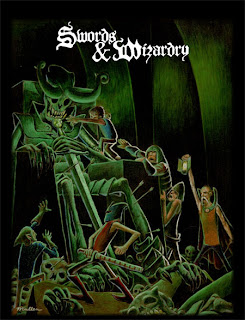 I feel completely . . . well; I feel like I've been missing out on such a great game.  It's a shame that the original Dungeons and Dragons was released 36 years ago.  But curiosity had gotten the better of me.  I'm looking at Swords and Sorcery.

Looking at this game, it's everything that 4e isn't mechanically.  It's Rules Light, thats for certain.  No rules for skills, no rules for feats, no rules for powers, no Attacks of Opportunity, no this, no that . . .  It's rules light for a reason.  Lately, I found out that it facilitates creative thinking and problem solving.  Not that saying that 4e doesn't, but Swords and Sorcery gives you a chance at real imaginative playing.  Chgowiz, Endymion, Kuntz, and others have been stressing play lately, and I've beginning to see where they are right.

There's been a movement to computerize D&D.  The question is simple: why computerize D&D?  Why program the game?  4e seems to be the aim of this idea.  But the simple fact is: if you want to play a computer D&D there are [metric] tonnes of options available to do just that.  The simple fact is, roleplaying or playing in general opens up new ways of creative thinking.

Here's a video that talks about that point very well:


I think I truly understand where Robert J. Kuntz, Chgowiz, and Endymion are going.  Probably enough to adopt Swords and Sorcery as the game of choice for Galatea.  Although, something's got to be done about that Vancian System if I do . . . (looks at D20 Advanced Magic).
Posted by Elton at Wednesday, January 20, 2010