Creation Myths of the Orcs: The Shattered Sword 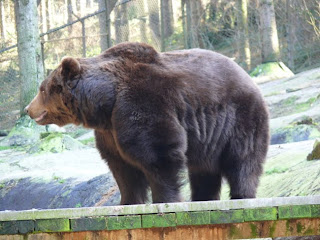 The Clan of the Shattered Sword. Ah, a clan with a particular history of being violent against humans. They are a particularly powerful clan of orcs with powerful muscular forms.  The men of the Shattered Sword are often brutish and thuggish in body.  They have freakish hulking bodies.  The females are more slender, but they built themselves up as much as their bodies can allow.   They once were, and are, the Clan of the Cave Bear.


Wacraft Orc by ~Atlantean6 on deviantART

Brother Bear
Once, on when the land was crawling with the Woolly Mammoths, the ancient ones moved to the lands of the North.  The Ancient Ones moved here, inspired by Nwali.  Led by the shaman Yurthal, the orcs that followed him were actually following a ghost bear to their promised land.  The people stopped in the forested Northern Wilderness where the Spirit Dance (Dancing Lights) played.  The act of Creation for the Clan of the Cave Bear begins when Nwali started making people out of red, brown, and green mud.  Some he baked too early -- and these were the paleskinned Men (meaning orcs).  Some he baked too long, and these were the darkskinned Men.  But the Clan of the Cave Bear, he baked just right.  He breathed life into all of them and set them upon the world.

Brother Bear asked Nwali if he could have a clan of his own.  Nwali gave him the baked just right people.  So, Brother Bear led the people into the North to a Promised Land that was bountiful of fish, game, and berries.  Yurthal thanked Brother Bear, and called his people the Clan of the Cave Bear afterwards.

The Clan of the Shattered Sword

Before the coming of the Demons, the Clan of the Cave Bear followed the other tribes through the gateway to flee the squid-faces.  We settled in a land like our own.  And had a great rapport with the animals and the game, just as we had.  But the Demon Azarael came to us promising power and strength.  Our shamans listened to him, just like the Shamans of the Burning Blade and the Shadowmoon.  And he bade all of us to hunt the bears.  Some of us would not do it and we split, separating themselves.  But we fell upon the bears, killing them and cutting them open.  We would dine on bear hearts and bathe in bear blood.  After this was done, we drank of the blood of Azarael himself.  Overnight, we became bigger and meaner -- mixing the powers of Demon and Bear.  We made swords and shattered them, taking the name of the Clan of the Shattered Sword and became the most bloodthirsty.

However, we redeemed ourselves when our former clansmen joined with the Humans and the High Elves and slew Azarael's mortal body, ending our bloodlust.  We rejoined the Clan of the Cave Bear, shattering our swords again and becoming one Clan, one Tribe.  The Clan of the Shattered Sword.

Fun at the Library said...

I wonder if a fan or orcs like yourself would be interested in a new fantasy novel just now coming out where uruks play a heroic part in the action. The novel is called ROSE OF STORMGAARD and the uruks appear about chapter 11 and are prominent for the rest of the book. They are called The Clan of the Cave Panther (heh, great minds think alike, eh) Pure coincidence since you were unknown to me before this morning. Anyway, it's my fiction and it can be found at: http://www.erbzine.com
--Ken St. Andre

Thank you, I'll check it out when I have some more time today. :)