Here is a new character for the manga, the Dragon Wife.  It is Dracandos, one of Fyreheart's brothers.  He's a little apart from Dragon society, so he's the only one who sympathizes with Fyreheart over her choice of a mate. 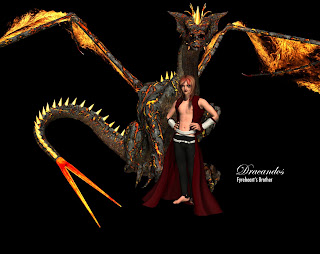 I haven't chosen which way he'll swing yet; but since he becomes a very beautiful man when he shapechanges into a human and has a strange way about him that puts men off guard but makes women and dragonesses swoon.  He is also smarter than his sibling and is allied with his sister's husband.

The Dragon Wife is going to be interesting, indeed, and does require mature readers.  Remember, I won't endorse bara, yayoi, or yuri story derivatives.  Rendered in DAZ Studio Advanced.  The DAZ Mat settings were a bear to figure out, and I still have to tweak them a bit.  This isn't a perfect DAZ material setting for Dracandos, or Fyreheart.
Posted by Elton at Sunday, June 13, 2010