Who Owns the Firebolt Spell?


Here are the spells in question.  First the EverQuack -- I mean Everquest version. 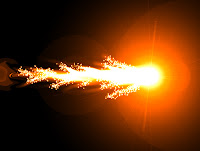 A bolt of fire shoots from the caster's outstretched hand, dealing 4d8 points of fire damage.  The caster must make a ranged attack to hit the target. (from EverQuest the Roleplaying Game Player's Handbook)

Here is the WoW version.

A ball of molten flame is created in your hand and is hurled towards your target.  The target takes 1d6 points of fire damage per level (maximum 15d6), plus an additional +4 points of fire damage per round for the next four rounds. If the target makes its reflex save, it takes half damage from the initial blast and does not take the additional damage.  blah. .blah. . . blah.

(from More Magic and Mayhem).

Okay.., Question is . . . WHO HAS THE MONOPOLY ON THE WORDS FIRE AND BOLT when combined together?  Answer is strictly, no one.  However, they could both argue that their monopoly is mantained over the likeness of the two spells in question.  Hence, another reason why Copyright sucks. (BTW, what moron thought it would be great to include spell names as an inclusion to Product Identity?)
Posted by Elton at Thursday, June 03, 2010

The sad thing is, I also seem to recall a firebolt spell having been published in Dragon Magazine in the late 90s in the Arcane Lore series of articles.

Yes, that is sad.

It gets more ridiculous
Lucas Entertainment owns the word ‘droid’
Therefore, if your game, book or film includes
That word
You can expect a call from a lawyer

Of course, hypocrisy knows no limits . . .
Lucas had no problem ‘borrowing’ the terms
Sith, banth or jed
From Edgar Rice Burroughs

Owning a word, such as droid, is complete nonsense. It makes about as much sense as owning a spell name such as "firebolt."

That's why I support QuestionCopyright.org and their efforts to reform copyright or abolish it (to them, it's both). It makes a lot of sense to take down copyright law. The only thing Libertarians agree on in the majority is keeping Trademark Law intact. A trademark is pretty important for a company's identity.