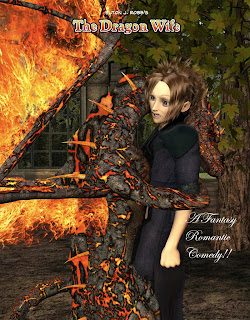 Imagine being at once confident over knowing who you really are and then thrust into a situation where you lose control of your life because of your wife?  The Dragon Wife comic idea came out of the DAZ 3D forums and one member's remark.

Set in the world of Galatea, Elton (yes, named after me) had it made.  A powerful and young up and coming shaper, he was personable and charismatic.  He had friends all over Galatea and the Caithness Isles, and some beyond that besides.  Even the orc warrior Greywulf had called him friend.  Well, that is until the Lord of Nottingham sent him on a quest to slay the Dragon that was inhabiting an old monastery for slaughtering the local livestock.

He found the dragon Fyreheart, who begged and begged him not to kill her since she was innocent of the crimes.  Besides, she only hunts wild game (and the occasional cattle who had lost their ways).  Believing her, he goes to find out what had really happened.  It seems that a band of raiders had done the deed.  Bringing them to justice, he returns to Fyreheart who is overjoyed that her honor and her life was saved.

Also, his life has changed forever since poor Elton is now stuck with Fyreheart, FOREVER!!  She says that she is eternally in his debt and wants to marry him!  How in the world is this possible?  Gasping, our hero is thrust into a world where his life goes out of control because of his dragonness wife.

Inspired by: I Dream of Jeannie
Bewitched!
You Can't Take It With You

Supported by his friend Greywulf the Orc Warrior, he tries to keep his dragon wife a secret from the Lord of Nottingham and his inquisitive Wizard -- Doctor Dancey.  Follow their misadventures!  This is going to be a fun ride!
Posted by Elton at Saturday, June 12, 2010