This is a little tutorial that will teach you what a Z-Depth Layer is.  It doesn't go into setting one up, it just gives you a primer and how Mood Master (a Dreamlight Product) available at DAZ 3D can be used to set them up.  This tutorial uses DAZ Studio 3 Advanced and Mood Master Z-Depth Layers 2.

What is a Z-Depth Layer?

In CG, Z-depth layers are grayscale maps that are set up to simulate depth of field, fog, and depth mats.  They can lend an air of realism if applied correctly.   A typical Z-Depth layer looks like this: 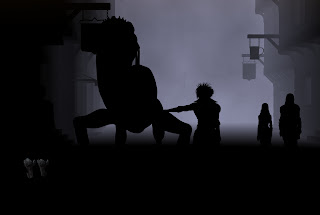 This was generated by Mood Master 2, for use in my comic.  As I said, this post isn't about making them up in Photoshop or DAZ Studio from scratch (or even poser), it's about what they are and how they are used.  Once generated, a Z-Depth layer can be applied either in Photoshop or the Gimp, or if you use DAZ Studio, as a render layer. 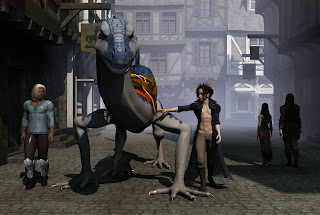 notice how the fog is applied?  You can get an instant effect that simulates haze, mist, humidity, or fog in your scene.  (the above scene includes Tyr for Michael 4, Hiro 4, Digital I's Biguana, Faveral's Medieval City, Stephanie 4 and another Michael 4.  Also, Dreamlight's Light Dome Pro 2.0 was used.)  Once applied, you usually have much much more realism in a scene.

I did a tutorial earlier on how to use Z-Depth layering to simulate humidity in a jungle scene.  However, since that tutorial is old now, I'll produce another tutorial on using Z-Depth layers to great effect.
Posted by Elton at Saturday, June 26, 2010