Okay, I choose to try Greywulf's campaign design philosophy. That is, who? Since our hero (or heroes, in this case) are the Main Character in my (or our story); we need to design an Antagonist for our hero to fight.

Since my story is about a man who goes to Atlantis to save his best friend from slavery (basic premise), it's easy to conclude that his best friend was either kidnapped, or sold. I chose to go with sold by the one person she trusted most -- her husband. So our bunch of Atlantean slavers took her away. But every group of mean baddies of this size needs a leader -- or the story wouldn't make sense.

Its best to say that the antagonist is someone of influence. Looking back to the rogues gallery we have: Lex Luthor (the self-styled Greatest Criminal Mind of Our Time), Kor (Dax's Antagonist in the Dax and Jaxter games), Norman Osborn/the Green Goblin (Spider-Man's greatest enemy), the Empire (Star Wars' antagonist), the Mandarin, and the Joker (Iron Man and Batman respectively). And there are a lot more. I.e. the Alien Xenomorph figures as the main character in all the Alien films (Alien, Aliens, Alien 3, Alien Resurrection) . . . but it's definitely the Antagonist. The Blob was the antagonist in the Blob film, and it was the main character (not bad for something made out of cornstarch paste!).

So, who is our Who? Procrustes, Slaver and businessman -- purveyor of flesh and smut. Procrustes is a rich Atlantean with power and minions. He is bulky, about middle aged, and has a beard and mustache. He could also be balding . . . Haven't decided on that one yet. He wears silks, and dresses to prove he has power and controls the slavery operation that operates in the modern day. He is also successful, selling slaves at his house of flesh. Procrustes' personality is a mixture of Phil Silvers and Captain Miles Gloriosus from A Funny Thing Happened on the Way to the Forum. But mixed with care so as there are more Captain Miles Gloriosus and less Phil Silvers.

Now we have our Antagonist out of the way, lets design someone to be our hero's Guardian. The guardian's purpose is to advise, to show our hero the path. But lets make our guardian complex and add in logic to present an interesting character.

Inventors in the Atlantis City builder expansion were presented as liken to mad scientists -- they wore their hair funny and their tunics (called a Chiton) were in tatters. They would wear worn out sandals or go barefoot. Although Atlantean inventors were goofballs, lets go back 50 years to the old time Chemistry set and draw on something more inspirational.

Our complex guardian for our hero(es) is the Atlantean inventor Hiron. Based on Hero of Alexander of olden times, Hiron has invented the device that the slavers used to get to our century to get their new batch of slaves. Instead of a crazy goofball, I want my Hiron to look and act like Burgess Meredith's protrayal of Ammon. 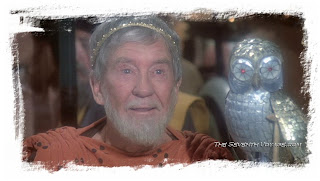 (You can't go wrong with Beverly Cross' and Charles Schneer's casting for the film, everyone was perfectly cast in that movie -- no matter how badly most of them acted [Harry Hamlin in particular]).

I like the portrayal of Ammon so much, that he made the perfect guardian character. So, Hiron would act as our guardian for our hero(es). Then we have two who-s. And we know our third Who, Atlantis itself. So all the story drivers are in place.

So, lets produce our passengers. We need a Skeptic, a Sidekick, a Logical, and an Emotional. After that, everyone is window dressing or extra.

A Skeptic is a disbeliever essentially. Atheists are skeptics, as an extreme example. Our Skeptic would be our hero's mother. She disbelieves in our Hero's ability to get what he wants ("You can't have your cake and eat it too," or "the root of all evil is the love of money," or "you cannot always have what you want"). When he gets to Atlantis, our hero's mother is replaced by another suitable skeptic. Lets call him Korihor and be done with it.

A sidekick has faith in our character's ability and power to get what he desires. A sidekick is always counter to the skeptic. Sidekicks include Bubo the Owl from Clash of the Titans (pictured above), R2-D2 and C-3PO from Star Wars, and Pancho from Don Quixote. I prefer two girls -- our hero's dead girlfriend Anne (who is named after my own dead girlfriend); and the Amazon woman Astra (who guides our hero on his quest, another guardian) who later becomes our hero's slave.

The Logical provides the logic and bearing. He or she sees the world in logical terms. They use reason to view the world and often border on skepticism. They usually follow Aristotle's logic in general, saying: "A tree grows tall and produces wood, leaves, and shade; an olive grows tall and produces wood, leaves and shade; so therefore an olive is a tree." Simplistic, but that is their line of reasoning. I believe an officer of the Atlantean army, Leon, would serve amply as the logical character of our story.

Finally, the Emotional. The emotional runs counter to our logical's logic. He or she sees the world through an emotional lens. Our hero's best friend, Celesta -- wife turned into slave by Procrustes, would be perfect.

And there is all eight characters, except for our hero, of course. :)
Posted by Elton at Friday, March 06, 2009