Religion in the Known Lands, Pt 3

There are many Monotheistic religions, but two stand out. Christianity and the Holy Light. 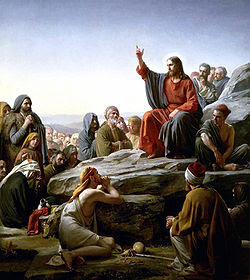 Christianity in the Known Lands is very popular, and many people express belief in Jesus Christ and follow what he taught. The chief religious text among Christians, however, is the Bible. Clerics among Christians who profess true Faith in Christ and in God receive the following domains: Good, Healing, and Knowledge. The religion itself is Neutral Good.

The Holy Light is mostly a philosophy. However, it is placed under monotheism since almost all followers of the Holy Light profess a belief in a Supreme Being or God. People think that the Holy Light is a synthesis of the Path of Light among the Kalashtar and Christianity. But this is not so. Most people in the Known Lands, including the Massalian Elves and the people of Caithness, follow the Holy Light.

The Holy Light is surprisingly laissez faire despite the priesthood that exists. The religion of the Holy Light is organized; and can get very dogmatic. Unlike Christianity, which is considered to be a Mystery Cult or Mysterious Religion (something most Christians would reject is the word -- Cult) the Holy Light isn't considered a cult. Just a way to follow and attain spirituality.