In our culture, eros has become defined as the love we share when we hit the sack with somebody. Eros is fun love in our culture, its no longer defined as a powerful feeling of being connected to someone. That's why cupid, the anthropormorphic manifestation of love, is depicted as a pre-pubescent or pubescent boy with wings. Love has been trivialized in our culture. 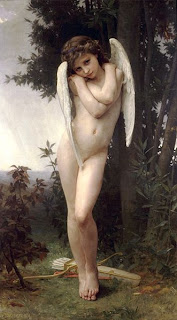 Probably because it's our fault to begin with. I don't know where this obsession to limit or stop procreation comes from, but it's definitely the root of the problem. We have to protect kids and ourselves from the depiction of Eros being enjoyed. We label all such art as Pornography and demand people to avoid it at all costs, as if it were a plague.

People create anti-pornography organizations and do war and fight against Pornography as if they are on a moral crusade to save us from ourselves. The terrible thing about this is, no one understands the true principles of how to defeat pornography. Or no one seems too.

As an artist, I strive to create art that reflects the beliefs I have about the body, and about life in general. This includes the depiction of sex at certain times, because I believe sexual union is a joy that is due to all human beings in its own time and season (ironic, though, that I'm an unmarried virgin). My beliefs will come out in my art. It's inevitable, I'm sure. But to display such sublime and beauty on a site that promotes violence is really the pits. However, it's the only place where I can post my creations without censure.