Orcs of the Known Lands 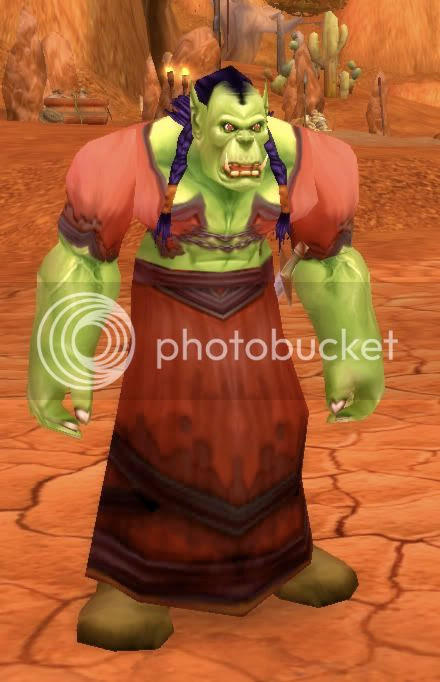 Although the Ancients managed to defeat and crumble the Illithid Empire; they found that their cousins looked monstrous. Br0wn skinned, tusked, and powerfully built -- they also walked with a apish slouch.

The Orcs are divided into three nations when the Known Lands were divided amongst Humans, Eladrin, and the Orcs. These included the Ashanti, the Makonde, and the Chocwi nations. The Ashanti nation settled in the Savannah, the Serenghetti, and Jungles of the land of Ophir. The Gomer orcs settled on the lands west of the Dragon Mountains, and the Magog settled on the lands to the East.

However, powerful changes to both nations by Dragons and fel magic have caused them to diverge in appearance. Both races are bred for War when discovered by dragons. Taught warlock magic, and used in conjunction with the elvish Pelagasiri and the Human magogian and gomerians; both tribes were used for conquest and world domination. The Ashanti, however, live out a peaceful existance with fewer wars with other tribes that split off from them.

All orcs have the same basic appearance. The differences between nations is apparent in skin color. Orc males are massive and brutish looking creatures. Weighing in at 250 to 300 pounds and standing from 6 to 7 feet in height, they are not a small race. Even orc women tend to be only a half-foot or so shorter and 50 to 100 pounds lighter than most males (and some of them are equal in stature to their male counterparts), having broad shoulders and muscular, powerful bodies. Orcs tend to have coarse and bristly hair and beards, often black or brown in color, graying with age. Their skin ranges from a light green to a dark drab olive to grayish brown. Eyes are usually brown, though a rare few have blue eyes. Orcs have broad, flat noses, tusk-like teeth jutting from their lower and sometimes upper jaws, and large, pointed ears. Orcs wear a variety of clothing styles, from furs and hides in some clans to heavy metal armor in others. They favor clothes of hide, and armor and arm themselves with a variety of gear.

Orc hair colors occasionally has tints of blue or violet. Orc eye colors include blue, brown, hazel, amber, and red. Pure blue eyes are quite rare in the orcish race, and are seen as a sign of great destiny or doom. Orc males sometimes choose to grow beards that are wild and untamed, while others prefer them to be braided and tasseled. These beards always hang from the chin, as orcs do not grow heavy facial hair above their upper-lip. Orcs have large heavy jaws from which protrude sharp, tusk-like teeth, heavy brows, a broad and flat snout-like nose, and pointed ears. A fair amount of sexual dimorphism exists between the Orc sexes, with male Orcs possessing more extreme orcish physical characteristics, most noticeably broader shoulders and larger tusks.

The Makonde -- All the Makonde orcs, now known as the Gothicos or the Horde; are green skinned. This is due to genetic manipulation by Dragon and fel magic.

The Chocwi -- All of those of Chocwi descent are red skinned. Also through genetic manipulation by Dragon and fel magic.


The Hocs -- The Hocs are the result of even more primitive living and backward genetic drift. Often called Jungle Orcs the Hocs are what you get when you cross a gorrilla with an evil disposition for war. They are grey skinned and look even more menacing.