To do this, we are using a technique called "Post Production" where you overlay one image on top of another. Save your image and your combined scene. Call it Jungle Queen 1 or something like that. Now, open Mood Master and add it to your scene. As a result, all seven lights we've used to bring the picture together is removed. 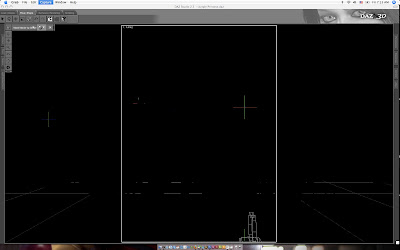 You notice on your scene tab that Mood Master is added. If you press the plus on the side, you get several items. Click the one called Deep Fog and click on the eye to the far right. And you get a fog effect added to your scene. You can manipulate your fog effect on the parameters tab. MAKE SURE YOU DON'T MOVE YOUR CAMERA! 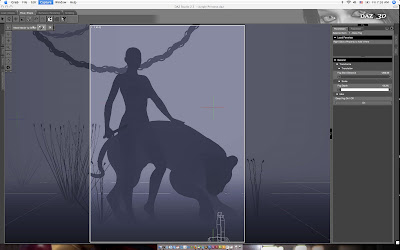 Best use the settings shown in the above screen capture, and RENDER! :)

After a few hours (it may take a few hours), you will get a render that looks like this:

Not very cool edge wise, but that's what we use our image editor for. :D

Now Open Photoshop (or your prefered image editor) and load both your Jungle Queen and the Mist picture you made before.

In photoshop according to the Mood Master manual:

1- Open a new picture that has the same dimensions as your Jungle Queen pic and your Mist pic, and fill it with Black. This is the Mix Layer.

4- You can adjust the top layer as needed. I suggest an Opacity of 29% for our Jungle Mist layer to simulate humidity. Flatten the image and output it as a high quality .JPG file (or TIFF).

And the final result:


Jungle Princess by ~Atlantean6 on deviantART
Posted by Elton at Friday, May 22, 2009

Very nice! The z-Depth shader from jlg's free shader pack works much the same as Mood Master for this kind of postwork. It's also free, and a LOT faster to render too.

Yeah, you talked about it. But I'd thought I'd use tools I know. z-Depth is not a tool I have so I didn't suggest it. Thanks for making a comment about it, now people who read this series know that there is a free tool out there they can use. ;)