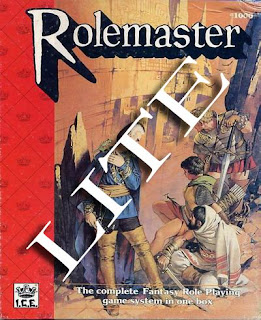 Some time ago, I wondered if a really "rules lite" version of Rolemaster can be made. Using a reduced system of rules. Reduced: meaning a game friendly to gamers who are afraid of adding and subtracting numbers over 20 (YES, they exist!). A set of rules does EXIST already. This is the Lord of the Rings Adventure Game.

The rules were so stripped down that you are rolling regular dice against a target number instead of rolling on a table for hit and critical strike results. Again, ICE was ahead of its time. The concept of the target number was used in Shadowrun and other games before ICE, but you don't see target numbers come into vogue until the Legend of the Five Rings RPG. There is talk on the official rolemaster boards of Updating this product and making it available for gamers who are phobic of adding and subtracting numbers over 20. The game is simple enough for young children to get into Roleplaying. And I'm talking 5 to 8 year-olds. I say, "ICE has a new gateway product."
Posted by Elton at Tuesday, May 12, 2009