Rolemaster Classic a head of it's time 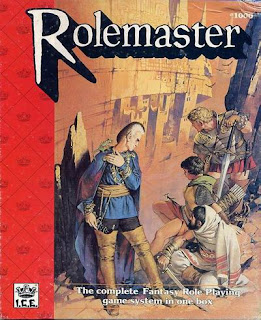 Rolemaster Classic for the Win! It seems that the new monks in D&D 4 are psionic based; according to playtest. Psionics, as you know, is the realm of the Mind. This came up before: in Rolemaster.

Rolemaster is a game that is very much ahead of its time. And according to Greywulf, a friend of mine, decades ahead of its time. Critical strikes in Arms Law was the driving force forward in selling Rolemaster. Although my favorite Arms Law is the 2003 RMFRP edition -- Arms Law is Ironcrown's biggest seller in the Rolemaster franchise. However, you may ask, what does Chartmaster or Rollmaster have to do with D&D 4? I'm GLAD you asked.

Rolemaster is one of the best Roleplaying games devised, if D&D 4 is catching up to it quickly enough (GURPS is of the same, if not higher quality). It divided the realms of power up into four areas: ARMS, CHANNELING, ESSENCE, and MENTALISM.

ARMS is your basic warrior, beat them up sort of crew.

Channeling is power from the Gods, or God, or whatever.

Essence is the Unified Energy Field (also God if you look at Energy Quantum Mechanically and draw similiarities from what Religion teaches).

Mentalism is drawing the Essence through your mind, once again, Power Creation (also God, again, but then . . . I'm Spiritual. I see God in everything).

In Rolemaster, mostly because of Star Wars influence than anything else; monks were associated with the Essence. This was called the Charltonian view. This is probably becuase monks would draw on the essence to cast their abilities. Terry Amthor (GREAT guy by the way) felt it was wrong for monks to draw on the Essence to power their abilities. He felt that monks, since they are more often associated with the East, would draw on Mentalism powers. This is called the Amthorian view.

Everyone may hail it, when D&D 4 monks come out, as a great LEAP forward that they are psionic. But, back in the 80s, when Rolemaster was taking shape, the people making Rolemaster did this long before WotC even had an inkling of doing it themselves. Rolemaster Classic is a game that is ahead of it's time.
Posted by Elton at Monday, May 11, 2009

I could write entire reams about my love for Rolemaster. The challenge today is finding gamers who want to play it. They see All Those Numbers and run away.

Which is a shame (and their loss) because it does play rather wonderfully too.

The best thing about Rolemaster is that they are talking over on Iron Crown about ressurecting a Rolemaster Rules Lite that has existed since the Late 70's.