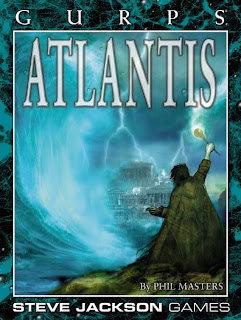 Yes, I am an Atlanteologist. I was watching a lot of movies on Atlantis yesterday, and I spent hours watching different movies present their arguments about Atlantis. Some of the movies sucked (one of them was pro-Secret Society). Anyhow, I present the following scenarios for gaming in Atlantis. The world that is presented in these Scenarios can be the GURPS Romantic Atlantis (found in GURPS Atlantis), or Atlantis: The Second Age roleplaying game.

The Scenarios are presented in Premise, the Twist, and the Climax format from Feng Shui. So they are bareboned, allowing you to build your own adventure for your group.

Premise: There has been a rash of kidnappings of young women of late. Something the PCs scoff of until one of their girlfriends disappear.
The Twist: A strange old man is found by the PCs, who is actually an Atlantean Theorist. The PCs chase the wierd little man, only to enter a dimensional rift through space time and end up in the city of Atlantis.
The Climax: The PCs are told that a group of Lemurians are attacking Atlantean interests in Magan (modern day Kenya). The PCs battle it out with the Lemurians in Maganese lands.
The Closing: The PCs return home, and one of the PCs is given the feeling that the Atlanteans might call upon them again.

Heroes of Atlantis
Premise: The Atlanteans call on the PCs again, transporting them to the City of Atlantis while they dream. The Atlanteans tell the PCs that the Lemurians they fought are in the Hordelands of Eria (Modern Day Utah). The Atlanteans want the PCs to investigate.
The Twist: The Lemurians are investigating the ruins of a possible laboratory, but they themselves are attacked by Monsters. (Use any monster you like, DM).
The Climax: The PCs must band with their enemies to defeat a powerful monster.

Sorcerer of Atlantis
Premise: An Atlantean Sorcerer has gone rogue, researching the Philosopher's Stone. The Atlanteans must call on the PCs again, transporting them after they had their time in the Gym.
The Twist: The Philosopher's Stone requires living beings to be manufactured. The sorcerer wants to create a Homunoculus in the shape of his dead wife (a living human by Alchemy).
The Climax: The PCs must try to defeat the sorcerer either through negotiation or through force, before he creates his Homunoculus.
Posted by Elton at Friday, September 11, 2009