The Shaper in Flight 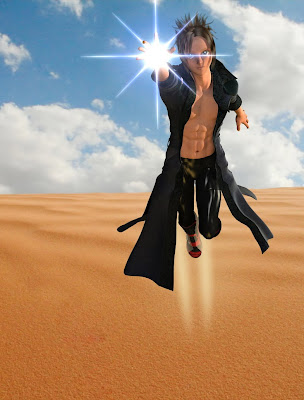 A thermonuclear war was perpetrated on the United States of America.

But the Shaper isn't.

The Shaper is America's last superhero. He is flying over the Minnesota Nuclear Wasteland in the portrait, the last surviving Superhero, he exists to dispense the justice of a beleaguered and shattered America.

Powers: Due to a hyperactive subconscious, the Shaper possesses the power to manipulate reality consciously. He has exhibited the following powers:
Weakness: There is no limit to what he's possibly capable of, but he is still mortal and can be destroyed. He's allergic to cats, tobacco smoke, and a rhinovirus infection ("common cold") makes him break out in a rash.

Personality: The Shaper is confident, he is also prone to anger, and have been known to attack his enemies with the slightest provocation. His cover is a simple nuclear physics teacher at one of the surviving Universities -- Arizona State University; relocated recently to a resettled Flagstaff, Arizona. In his cover, he looks his real age, 40ish. When he becomes the Shaper, he restores himself to a youthful and vital 20 years of age.

As a superhero, he serves the folk of the Fringe (Intermountain West Region), by scouring America for survivors in the lower Forty-Eight States and attacking their enemies. The end of the Age of Heroes came at Christmas, a while ago.

Strength Level: As a twenty-year old, the Shaper possesses the strength of one who does regular strength training. As a forty-year old nuclear physicist, he possesses the same strength level.
Posted by Elton at Thursday, September 17, 2009