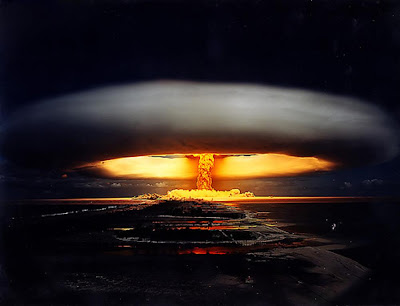 It came one Christmas Eve, at midnight, Central time. The missiles hit, coming from a global power. The missiles spread themselves, hitting many different cities in the USA and destroying them. Many missiles hit Boston, but one missed and exploded in Boston Bay, causing a giant tsunami that swamped the city.

In New York City, the missiles' intense heat melted the Empire State building and incinerated the Chrysler building. In Washington, DC., the Capitol building was shattered and parts of the White House was converted into rubble. The IRS building was ground zero for a missile and was left standing while everything around it was reduced to ashes.

Baltimore was reduced to ashes, and Langley, Virginia was utterly destroyed. Forty Seven major population centers, many military bases, were all destroyed in an all out nuclear attack. For instance, in the West, several dams were blown to nuclear dust: Glen Canyon Dam, Flaming Gorge Dam, and Hoover (or Boulder) Dam. The Colorado was set free, swallowing Los Angeles and creating a virtual island out of Baja California. Seven missiles hit Seattle-Tacoma, Washington; and the intense heat caused a Lahar -- a landslide of water, rock, and silt that swallowed the two cities completely up. Minnosota, Michigan, Illinois, and Missouri were so hard hit, that they became wastelands.

Salt Lake City, just days before, was in the heat of a civil religious war. The Mormons split themselves in a religious schism. The schism caused the population of the Salt Lake Valley to turn upon one another; never noticing that the Junior Apostles took the records south beyond the Colorado River. The streets ran red with blood and hate. Until five missiles fell upon the valley, ending the conflict by nuclear fiat.

In the chaos, several Superheroes were caught unawares. And they all . . . died. Except one. 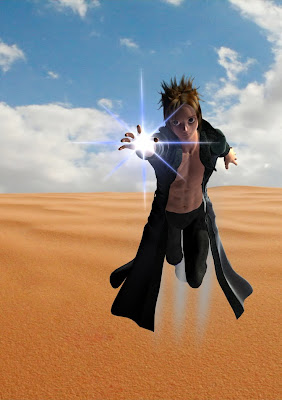 The Shaper
The Shaper is a nuclear physicist who was working at the Superconducting Super Collider at Waxahachie, Texas. He and his family were vacationing in a remote part of Arizona when the bomb hit. The Bomb hit Phoenix, Arizona, so he and his family was forced to flee to Flagstaff, Arizona. When the Fallout from the Glen Canyon Dam came, the family hid in a community fallout shelter under the post office in Flagstaff.

Now, two years after, the University of Arizona State had been fully established in Flagstaff and the Shaper teaches nuclear physics there.
Posted by Elton at Monday, September 21, 2009