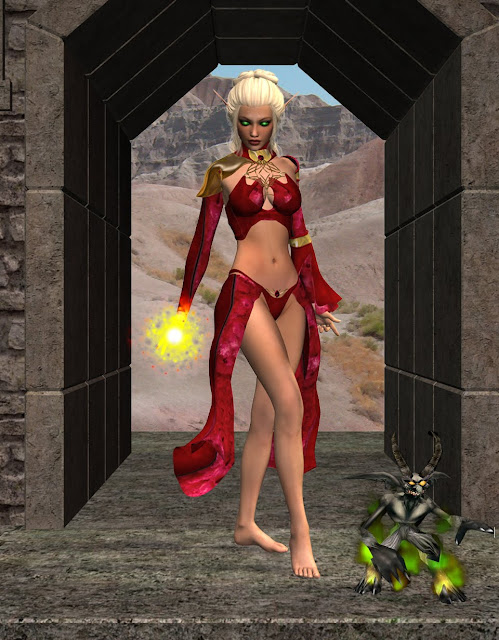 Blood elves in World of Warcraft are a race with bright, intense, green glowing eyes.  They are fair skinned.  And they are cursed to live an existence draining power from demon crystal stones and other magic sources.  They suffer from an addiction to magic.  And they all look to Prince Kael'thas Sunstrider to restore their race to power and glory.

Alcániel is a Blood Elf warlock of the highest order.  She treats her familiar, Pipquik, as a mere tool rather than an ally or a friend.  Alcániel hates demons and all demonkind, but she fights fire with fire, even though she uses demon magic as a source to stave off her addiction.  She helped the Blood Elves break from the Alliance and join the Horde, and now is allied to the Horde in order to help lead the Orcs back to Outland.  She also sees Outland as a sort of promised land for her people, and hopes to join her vaulted prince, Kael'thas, in Outland (this takes place before Kael'thas stole Mu'ru from Silvermoon).

As a Warlock, Alcániel's powers relate to demonkind and demonic magic.  She uses fel magic to wrought her purpose.  Unlike the Warlocks of the humans, gnomes, or the Shadow Council; her people see her Warlock ways as a boon rather than a curse.

Dirty Little Secret: One of her brothers, the Mage Vórimóro, was killed by the Scourge Plague in Lordaeron.  He has raised as a Forsaken mage.


Blood Elf Traits (Su):
• Magic Addiction: Blood elves are addicted to the use of arcane magic. A blood elf must spend 1 hour each morning in meditation, resisting the distractions of their addiction, or take a –1 penalty to effective arcane caster level and a –2 penalty on saving throws against spells for that day.  Blood elves have learned to slake their thirst through the absorption of fel energies. If the blood elf partakes of demon’s blood, the magic addiction abates for a number of days equal to the blood elf’s Spirit modifier (minimum 1 day).

• Racial Animosity:  Blood elves reek of fel power, offending the spiritual senses of night elves and tauren. Because of this, blood elves suffer a –2 circumstance penalty on Charisma-based skill checks made when relating directly to night elves or tauren.

• +2 racial bonus on saving throws against mind-affecting spells or effects.

• +2 racial bonus on Concentration, Knowledge (arcana), and Spellcraft checks.
These skills are class skills for all blood elf characters. 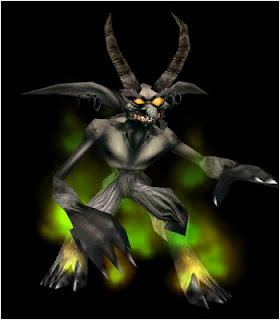 This small, thin humanoid has two long horns and bright yellow eyes. A wicked grin spreads across its narrow face as a ball of flame materializes in its palm.

Pipquik is a mean, mischevious sort of demon who questions why and how Alcániel always summons and dismisses him.  He enjoys setting things on fire, and has this thing with casting magic firebolts that glow green and setting things on fire.  Piquick has graciously learned the following abilities taught to him by Alcániel from demonic tomes: Improved Firebolt (basically his firebolt has been Empowered) and Blood Pact.

Combat
Lesser Firebolt (Sp): Pipquik can invoke an effect identical to a lesser firebolt (DC 13) 6 times/day. The save DC is 13 + 12.
Spell Resistance: Pipquik has spell resistance equal to 17.

This hulking blue creature looks vaguely humanoid. It seems to appear from within a black cloud as dark as the void.


Stormchaser is your standard, stupid and hungry voidwalker.  He attacks at Alcániel's every command and continues to attack until told to stop.  It speaks in a base voice, a voice that gives the impression that its male.  Stormchaser has learned the following abilities from Alcániel from demonic tomes: Attraction, Aura of Suffering, Sacrifice, and Spell Resistance.

Tormenting Strike (Su): The touch of a voidwalker brings a victim’s most painful memories rushing to the surface; for a brief moment, she can think of nothing but destroying the source of this mental anguish. Any creature with an Intellect score of 3 or more that takes damage from a voidwalker’s slam attack must attempt a DC 14 Will save. Failure means the creature cannot make melee attacks (even attacks of opportunity) against anything but the voidwalker for 1 full round.  The save DC is Charisma-based.

Consume Shadows (Su): A voidwalker can absorb the darkness surrounding it, thereby healing itself of wounds; using this ability provokes attacks of opportunity. A voidwalker in total darkness can spend  full round concentrating (losing its Agility bonus to AC for the round), drawing the darkness in and producing a faint indigo light around its body. The voidwalker heals a number of hit points equal to its Hit Dice + its Stamina bonus (8 points in the case of the voidwalker presented above).

A voidwalker may consume shadows in shadowy illumination but heals only half this amount. If the voidwalker takes damage while it using consume shadows, it must attempt a Concentration check (DC 10 + damage dealt) or fail in the attempt.