Contemplating the Martial Art abilities of the fighter, since I see the fighter as a Martial Artist, I took a stronger look at the Pathfinder Fighter.  One thing is for sure, a Fighter is a student of the Artes de Mars, those techniques which would improve on hitting your opponent.

Random 4e Supporter: "Ah, but the fighter gets only one basic attack." 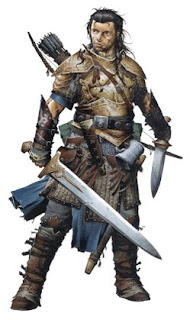 I'm proving you wrong.  That's why I'm developing Martial Arts rules for the Fighter in the field. These martial arts appear as Weapon Arts, the art of using the sword, staff, hauberk, pitchfork, war flail, and other weapons to better get your opponent and to defend yourself.  I've chosen to develop three core arts tht are still alive (one is technically resurrected) from two different cultures and then to expand from there.

Special Abilities:
Base Attack:  That one basic attack some 4th Ed players complain about.
Parry: The art of blocking your opponent's blade with your blade.
Half-swording: The art of using your sword as a club by holding the blade.


Special Abilities
Base Attack:  Yet again, that one basic attack.
Parry: Parry yet again.


What I am proposing is to change the fighter into a general martial art stylist, and make the duelist PrC a Prestige Class specializing in mastery of one particular Weapon Art.  Fortunately, the Pathfinder version allows one to do that.  In Rolemaster this is a lot easier than it looks with the Martial Arts Companion, in d20 -- what ever the version -- its a lot harder than it looks because 4th ed and Pathfinder doesn't give you a lot of options.
Posted by Elton at Monday, March 08, 2010