Creation Myths of the Elves: The High Elves

The High Elves have three creation myths.  One from the Fair Elves, one from the Pelagasiri Elves, and one they created themselves.  A fourth Creation Myth was created by High Elven Philosophers later to show more unification.

The Tale of the Sun God, the Moon Goddess, and the Night

This High Elf creation myth comes from the Fair Elves. The tales deal with the Sun God Corellon Larethian and the Moon Goddess, Sahanine Moonbow.  A fourth Actor -- the Voice in the Night; completes the Triadistic view of the Fair Elves. 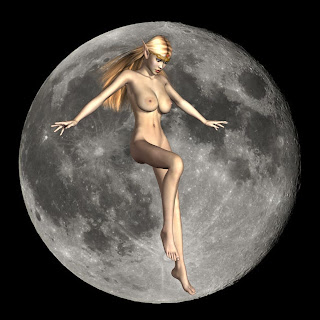 In the Distant Past, there was Chaos.  But Chaos was all and nothing.  Chaos wanted to comprehend itself so it gave birth to its children, the Cosmos, the Stars, the Goddess Eurynome, and the Cosmic Serpent Cosmigon.  Chaos also gave birth to Love, Order, and Light.  Eurynome flitted through the Cosmos and Cosmigon chased the maiden.  However, Cosmigon caught Eurynome and encircled her tightly in its coils.  After a time, Eurynome turned herself into a swan and flew free.  In time, she laid eight eggs.  One of which was the Sun, another the earth, and a third the moon.  And then she flew away.

The Cosmos smiled upon the earth, Arborea, and the two were attracted to each other.  They loved each other and through their union Arborea gave birth to Corellon Larethian and Sahanine Moonbow.  Being the Son, the Cosmos gave Correllon dominion over the Sun.  And being the Daughter, the Cosmos gave Sahanine Moonbow the Moon.  However, a third being was born from Arborea's and the Cosmos' union.  A second daughter named Monanie. 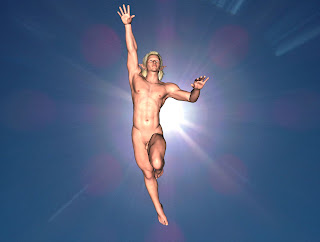 Cosmos then abandoned his little family.  It was at this time, though, that Corellon Larathian had to choose among his sisters to take as his wife.  He took Sahanine Moonbow [pictured] to be his wife, and Monanie became jealous.  At this time, the pair called out among the souls that were birthed out of Chaos to see who will become their mortal sons and daughters.  But Monanie was angry and demanded that she would force everyone to be right and good.  She lured many after her with her flattering words so that she could unseat Sahanine.

Thus began a brutal war in the Heavens which caused Monanie to be cast out into the Night.  Hence she became the voice in the night.  Then Sahanine and Corellon travelled down to the Earth and fashioned elves out of red clay, made them flesh, and then breathed life into them the souls of the elves.  And to this day, Corellon and Sahanine watches over us, guiding us to the right while the Voice in the Night whispers to us to tempt us to evil.


The Myth of the Pelagasiri
The Gods created the Heavens after deciding that they want to play a game.  The Gods created the World [Galatea] and filled it with the Spirits of Life, Fire, Water, Wind, and Earth.  The gods, having decided that plants should be on the earth, put plants on the Earth and ordered them to multiply.  The gods then created the animals and ordered them to multiply also.  As a result, the gods decided that they were bored with just having animals and plants so they made forms after their own appearance out of rocks and dust.  After this was done, the Gods felt that the work was good, and then withdrew to allow us to play out the game.

The first of the elves was Pelagus.  Pelagus taught the us how to hunt, how to gather, how to make tools, and how to make a simple garment out of animal skins.


The Myth of the High Elves

The High Elves myth is recounted as such --

The Gods are these: Aetherios the Sky God, Chthon the Earth God, and Oceanas the Ocean God.  The three gods decided to create the world and so the three came together.  Chthon formed the Earth, Oceanas the World Ocean, and Aetherios the Sky.  And so they made the world by uniting their bodies as one and splitting their own souls into infinity to make the souls of the World.

From their bodies, came forth the Gods, the Giants, the Fairies, the Nymphs, and the Monsters.  Then the Gods gave birth to a second generation of Gods of which the God Daltos was Chief.  Then the New Gods made war with the Old Gods and won.  Not to be outdone, the God Monster Typhon made war against the New Gods.

But the World belonged to Daltos, and he would not put up with the God Monster Typhon's rebellion for long.  So Daltos launched a mighty Thunderbolt striking the God Monster and sending him into throes of pain and heat and soon an all consuming fire threatened to consume all the world.  What would contain this fire?

Seeing his answer, Daltos picked up an entire, mighty mountain.  He then threw the mountain on the raging Typhon fire, preventing the fire from consuming the world.  Daltos then reigned over all the Earth until the Third Generation.  The Third Generation of Gods went to war with Daltos' Generation.  Using a sickle, Daltos' son -- Leonitidas, beheaded Daltos and threw his dismembered head into the Dalton Sea, making it red with the god's blood.  Desiring worshippers, Leonitidas ordered his brothers and sisters to take wives among the fairie and the nymphs.

The result of the unions were us, the Elves.  We worship Leonitidas because he made us.  And we were meant to rule because we are the Children of the Gods.

Thus, the three major myths.  The first two are taught in mystery cults.  The third is universal.  However, a fourth is being postulated.   Its unknown which are really the truth among the High Elves.  The Sea that is the Dalton Sea, is really red -- but not red like blood -- the myth only explains in the High Elf consciousness why the Dalton Sea is red.  However, High Elf philosophers have been challenging these Creation Myths as being unreasonable.  That is why a fourth cosmological myth is being postulated by the philosophers.
Posted by Elton at Wednesday, March 31, 2010

Was reading the first myth and the first thing that struck me was 'why did Corellan have to pick?' It seems odd in a universe with only three actors, they'd deny love to one. Hell, why couldn't the sisters be together?

See the trouble that monogamy brings? ;)

I guess I've always seen elves as being less 'traditional' in their mating and pairing behavior. More 'fey', being immortal and all.

But still, a cool myth that sets up the light/dark elf war.