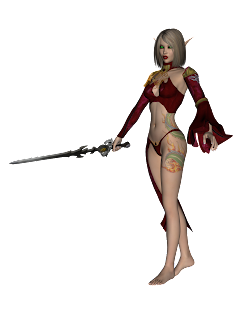 Description:  Since the destruction of their Ancient Homeland on Galatea, the Massalian Elves have been fighting a long and losing war with the High Elves, or the Pelagasir.  The Massalian Elves are a desperate race, particularly after the Pelagasir elves conquered their lands and destroyed much of their original culture.  Driven to rescue their own people from enslavement, they engaged in a war that lasted a thousand years.  The history is simple from a Massalian Elf's point of view.   The Pelagasiri, who were once the Gray Elves, conquered the land and killed many women, men, and children of the Ványanösse or the Fair Ones.  As a result, the devastation to the culture had prompted a change to overcome the Fair Elves of Massalia.  First the shock, then the steady change from a people of peace to a people of War.  The Warpriests took over the government and became the forceful movement in retaking their homeland from the evil Pelagasiri.  These priests, the priests of Corellon, were vengeful and wrathful and stirred up the Massalian elves to anger.  The Massalian elves then called themselves the Sercënossë or the People of the Blood.
For a thousand years, many wars were fought between the Massalians and the Pelagasiri.  Over time, their culture changed dramatically.  The Fair Elves of the Massalia had become the Massalian Elves and the Pelagasiri became the High Elves.  After a thousand years, everyone forgot the reasons for fighting and so a cease fire was made.  The two nations then dwelt in peace.
A thousand years later, everything changed.  The High Elves settled on the Caithness Isles, forming Quel'thalor.  And the Massalian Elves have been facing invasions of trolls of late due to them being displaced by the humans of the French Ark -- the Ys.  The French had been moving into Troll Territory, and displacing them, the trolls invaded Massalia.  Faced with extinction, the Massalian Elves quickly evacuated Massalia and moved to Caithness.  Finding Anglesey, the Elves overtook the island.  They conquered the Elven and human population that was there, and even sunk the Space Ark Bretonia under the sea.  After that, the elves touched the shores of Al-Caria and started to conquer and pillage the Muslim land.
The Al-Carians declared Jihad after two cities were conquered by the Massalians.  The two cultures clashed, causing much war and bloodshed.  The Massalians advanced though, invading the holy city of Caria and razing it to the ground.  To Al-Caria's defense came several regiments of Caithness' humans, but to no avail.  The Massalians used magic to sink the ships before the regiments could even make a beachhead.  The Massalians enslaved the muslims of Al-Caria, especially those that would surrender, and stripped them naked.  As the occupation and the annexing continued, the region of Qal'Massalia was formed.
On Anglesey, the island was renamed Caer Massalia, or New Massalia.  All of conquered Al-Caria was renamed Qal'Massalia, and on the ashes of Caria the Massalian elves used magic to raise a new city.  From the ashes rose the City of Fierysun, the new capital of the Massalian Nation with the village of Caer Massalia being the first village of the Elves.  After conquering the Whispering Forest, the Elves stopped their invasion.  With only three cities, the Muslims of Al-Caria is considering sailing their population to Hyperia, or asking the Republic of Devonshire to annex them.
Appearance:  The Massalian elves stand a little taller than humans.  They are also slimmer, and have symmetrical features.  They weigh between 100 to 175 lbs, depending on their gender.  The elves are uniformly fair in complexion, with their eyes a glow with intense greenish color.  All Massalian elves range from fair to bronze tan in complexion.  Their hair ranges from butter blonde to pitch black.
Society: The Massalian Elves have turned to an Enlightened Monarchy after five hundred years of being under a Militocracy.  The Monarch -- known as the Sun King, is the pontiff of Massalian Religion.  Despite their religiousness, or because of it, the Massalian Elves are using volatile demon and fire magics to power their kingdom.  Around the Massalian villages and lands are crystals with demons trapped inside them.  These crystals are power batteries that the Massalian elves drain magic from. Like the humans' psychic power plants of their Arks, these Crystals act as power plants but on a limited scale.   While human psionic power plants bend reality to create anything, the Demonic crystal power plants are nothing more than a source of magic.
Aside from that, the Massalian Elves still rely on slaves to do all their hard work for them.  Slaves are generally treated well.  Beautiful slaves often become concubines, while strong slaves are used in the mines to mine iron, tin, and copper on the faraway land of Cyprus.
Faith:  The Massalian Faith is Henotheistic.  Most of the elves believe in the former Fair Elven pantheon, but all venerate Corellon as their All-Father.  So far, none of the elves have converted to the Holy Light -- the Atheistic faith of Angland.  Still, the priests of Corellon venerate the Sun Deity as the Elven God of War, Statecraft, and Magic.  Massalian Elven Priests are granted the domains of Good, Glory, Healing, Nobility, Magic, and War.
Massalian Elf traits:
• +2 Intelligence, –2 Constitution. Like their high elf cousins, Massalian elves are intellectually superior to many other races, but physically frailer.
• Medium. As Medium creatures, Massalian elves have no special bonuses or penalties due to their size.
• Massalian elf base land speed is 30 feet.
• Low-light vision.
• Weapon Proficiency: Massalian elves are proficient with the shortbow, composite shortbow, short sword, and scimitar.
• +2 racial bonus on saving throws against mind-affecting spells or effects.
• +2 racial bonus on Concentration, Knowledge (arcana), and Spellcraft checks.  These skills are class skills for all Massalian elf characters.
• Automatic Languages: Common and Massalian.

• Bonus Languages: Dwarven, Eredun, Goblin, Kalimag, Nazja, and Orcish. Massalian elves learn the
languages of their enemies and allies.
• Racial Levels: Unlike humans and some other races, Massalian elves can take a few levels in “Massalian elf” as a class to develop their racial qualities more fully. See a future supplement for this class.
Posted by Elton at Friday, March 12, 2010