The Eladrin of Galatea 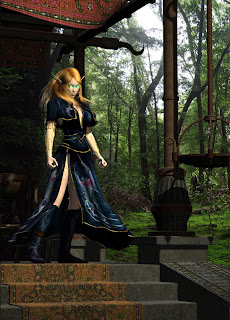 (Rolemaster [RMFRP/RMSS] version)
Description:  The Eladrin is an ancient race that is essentially a genetic redesign of Human DNA for the purposes of colonizing Arborea. Created by the Ancients of Galatea from their own human genome, their heritage has shaped them into a mystical race with a bond with the Orgone energy.  Bred by the ancients to fit the arboreal planet of Arborea for colonization rather than slavery, the Eladrin have built a highly advanced society based on Arcane Magic.  The Eladrin are practical and not superstitious.  They are often very curious and have found many solutions to various problems.

The Eladrin are very long lived. In pre-history, during the first Interstellar War, the Eladrin used their starships to defend Arborea from humanoid aliens of a cephalpodic tenticular persuasion.  Their ships were powered by Magic itself, and the weapons they used were powered by magic.  The spells they unleashed during the war was devastating and even apocalyptic.  However, it was all in vain.  The tenticular humanoid aliens managed to get to Arborea's star system and started a systemic invasion of their solar system.  Faced with no other alternative, the Eladrin gated the elves to Galatea and proceeded to blow up their planet as a last ditch defense.

The explosion of Arborea was spectacular.  The magic the Eladrin used was a powerful ritual that destabilized the core of the planet and caused rupture along the tectonic plates.  The invasion fleet of the humanoid cephalopods was obliterated and the planet itself was in ruins.  But the planetary pieces of Arborea are actually holding together due to central gravity and Eladrin magic of the survivors.  Still, any Eladrin ships limped to Galatea using Relativistic time dilation rather than their faster-than-light engine systems.

Reaching Galatea a few thousand years later rather than by Stargate or Hyperspace, the Eladrin had settled in the subcontinent of Killyronde to start over and begin a new life with the fledging nation of Myst'ilanas.  The people here are exhausted and tired, knowing that their days of glory are over thanks to the aliens they fought.  They then put their ships on course for the sun and flew their ships directly into the sun.

Most Elves of Galatea accept the Eladrin as the ruling class when they all lived on Arborea, now they are a broken culture.  The Eladrin that have returned to Galatea wish only to rebuild their society and preserve their culture.  Their empire gone, the other elves just return respect to them.  However, despite their faded glory, the Eladrin still have knowledge of the Metaphysical Laws of the Universe.

Coloring: Most Eladrin have Black to auburn to golden blond hair.  Their eye iris color ranges from brown to blue.

Endurance: Like the High Elves, the Eladrin have better stamina than what could be expected.  They can endure 12 hours of travel without tiring or needing rest.  Additionally, they typically rejuvenate their bodies through meditation rather than rest or sleep.

Height: The High Elves are taller than the Eladrin, with the Eladrin males averaging 6 ft. and the females 5 ft. and 10 in.

Lifespan: The Eladrin were effectively immortal due to tying themselves to an Artifact that was blown to bits when the planet Arborea exploded.  Now they bear an extended lifespan, the Eladrin can live to an average of 750 years.

Resistance: The bodies of an Eladrin is highly resistant to disease.  The Eladrin can receive a +100 RR to most diseases.  The exception is when an Eladrin is in proximity to Arcanite.  Aside from that, the arcane magic that an Eladrin is used to allows the Eladrin a +20 RR to Essence spells.

Special Abilities:
* Eladrin Teleportation: An Eladrin, sometime during his youth, learns the secrets of teleportation.  The ability works like the spell Long Door [see Lofty Bridge spell list in ... Of Essence], allowing the Eladrin to step into the Ethereal Plane, slide five feet seemingly in an instant, and exit.  Each time an Eladrin teleports it costs him 5d10 exhaustion points.

* Arcanite Vulnerability (Greater Flaw): All Eladrin suffer from Radiation Sickness while in the presence of Arcanite -- a purified version of Thorium.  This is a -20 RR against a Conversion Poison for them.  Weapons made from Arcanite does double hit damage against an Eladrin.

* Dark Vision: The eladrin can see on a star-lit or moonlit night as if it were full daylight. In conditions darker than that, they need a light source to see, and their vision extends to 50' feet (perfect vision) and 100' (they can see reasonably well). In absolute darkness, however, they can see no better than Men.

Prejudices: The Eladrin regard goblins and dragons as their steadfast enemies, and the Cephalopodic aliens as something that should be killed on site.  The cephalpodic humanoids and the Eladrin have been at war for as along as the Eladrin on Galatea can remember.

Religion: Eladrin, like humans, run the gamut.  Some worship the Sun God and the Moon Goddess, others seek communal spirituality with nature, and some worship the humans' El or Yah.  Most Eladrin due to the First Interstellar War, has given up on Religion altogether and practice quiet deism, agnosticism, or atheism.  A few have adopted the Ancient Pantheon, but they are few and far between.  Still, some worship gods of shadow and flame or worse yet, demons.

Preferred Professions: Eladrin know and master the Metaphysical Laws of the Universe.  Some choose to be to be Arcanists and Arcane Elementalists.  Others are Magicians, Illusionists, Mentalists, Paladins, Mystics, Priests, or Dabblers.  Those without talent for magic or have no belief choose to be any Arms profession except Warrior Monk.

Typical Cultures: Myst'ilana is a region of woods, hills and mountains.  Most Eladrin hail from the cities, and are building cities for themselves. Eladrin may use the Sylvan and Highland templates also.

The Eladrin are a broken people, but still they have an air of respect about them.  And they usually keep to themselves.  A few young Eladrin may want to go out and explore the world.  They might want to see what Galatea is like now, since the First Interstellar War.  They might want to explore to learn how others use magic.
Background Options

Special Items: All are available.

Talents: All are available.
Posted by Elton at Thursday, March 25, 2010

Wow. That took me a while to digest - very thoroughly done :D Excellent work there, my friend.