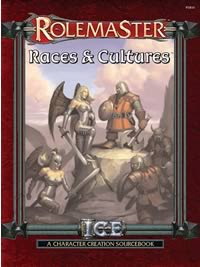 Looking over the Races and Cultures .pdf, I am surprised at how it would be so simple to write Galatea as a Rolemaster product instead of a d20 (or Pathfinder) one.

Each Nation would have their own cultural identity such as the people of Myst'ilannas -- the Eladrin (you have seen the Pathfinder writeup). This brings a lot of things forward.

The orc horde, for instance, although based on the orcs of the World of Warcraft, they too get their own entry.  Tribal society, living in the badlands, a mixture of desert and highland culture.  Plus, each human culture would get a cultural entry as well -- The Northumberlanders are a lot like the Vikings, the Germanic Tribes, and the Picts combined with a Norman English government.  The people of Caithness identify with a Lancastrian English Government with a Queen.  The people of the Republic of Devonshire (which used to be a shire of Caithness) has a Representative Republic.  Al-Caria is a Sultanate.  Each with their own ideas on how they run their government.  Their cultures stand out too: Northumberlanders are a lot like Dark Ages England with a Norman English influence (i.e. when William the Conqueror took power).  The people of Caithness are on the brink of Renaissance but they believe in the Divine Right of Kings.  While the people of Devonshire are having a Renaissance.

But there are other problems--
Some of the character types are also inspired by WoW.  Shamans are quite easy, Warlocks aren't.  As I played WoW, one of my favorite classes to play was the Warlock.  It was a so called, "pet class" since you summoned a fiend from the Twisting Nether to fight as you cast spells at your enemies.

Aside from that, the Shaman was also a forward looking class.  Although, the Shaman can be easily made with a Priest template.  The other professions from WoW wouldn't work with a template and you might be looking at rebuilding the Warlock from the Channeling companion.  The rest transfer directly.

Rogues would be either rogues or thieves (or magents).  Plus there a few other things I could do.  Question is -- could it sell?  Well, the success of the Shadow World shows that campaign settings can sell.  But the d20 Glut may have put a stopper on these things.  In any way you slice it, however, the only problem in translating Galatea is the Warlock class.  Fortunately, one can make a Channeling Template for the Warlock as a Pure Essence Priest; and designate certain lists (Curses, Dark Summons, Fiery Ways, Fire Law, Flesh Destruction, and two lists from the Warlock) to round it all out.  Some of the curses will have to be changed, and some other things will be introduced.

Some spells are just bread and butter to the warlock -- Life Drain and Soul Drain (after someone dies, the soul energy you siphoned coalesces into a soul shard when you cast that spell).  Other than that, a Galatea under Rolemaster would be easy to write and easy to GM.  You will still need a spreadsheet to create your characters.
Posted by Elton at Wednesday, March 24, 2010