The Wood Elves of Quel'lathor 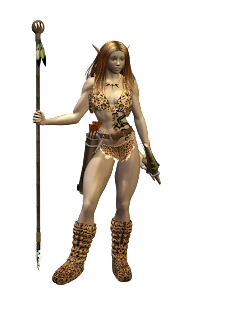 W
The Wood Elves of Quel'lathor

Description: The Wood Elves dwell in Quel'lathor, also called the Misty Forest by the minotaurs of Achaia.  Once they were the descendants of the Pelagasiri Elves, those who would become the High Elves, but they migrated to the Caithness Isles and other lands before the Pelagasiri became a mighty and warlike people.  They safely settled in Killyronde and Caithness and built a stone age, neolithic culture.

The wood elves call themselves the Taurëlie or the "people of the forest."  The Wood Elves are an ancient culture, with religious traditions steeped in Druidism and Shamanism. Their ways and their heritage has shaped them into powerful warriors and cunning archers that revere their lands.  The Taurëlie are superstitious, yet they are good judges of character and situations.  They are often cool under pressure, their fey like attitude about the wood keeps them helps them to deal with stressful situations.

The wood elves regard themselves and the people around them as primitive and not understanding of the ways of the forest.  They see humans as disquieting, young children who have not yet learned.  They see the Eladrin, their ancestors, as haughty and stuffy.  The wood elves believe in honor, largesse, and hospitality.  They typically take what they need from the abundant forest.  The wood elves themselves are often seen as fey, fairy-like by other races, including the Massalian Elves and the High Elves.  However, humans seem to appreciate them since they have stronger bodies due to living in the wild forests of Killyronde and Caithness.
Appearance: Wood elves, or the Taurëlie, have more muscular and hardened bodies due to their lifestyle.  Like all elves and the Eladrin, the Wood Elves possess long pointed ears.  The men are typically much more cut and shaped than the Eladrin, the High Elves, or the Massalian Elves.  Men are also typically bearded.  Females tend to be also muscular, but they have voluptuous forms rather than being lithe. A wood elf's skin tone ranges from pinkish white to dark and tanned.  Tribal style tattoos are common among warriors, hunters, and rangers of the Wood Elves.  Wood elven clothing tends to be functional: spun fabrics is rare, the wood elves tend to rely on animal skins.  However, the wood elves have been trading with humans for flax and cotton for spinning and weaving.
Society: Many of the Taurëlie feel a bond with nature and strive to live in harmony with the natural world.  Their government is tribal, based upon a code of honor and integrity.  Thier spiritual life is guided by the Taurëlie druids and the shamans.  The druids represent the world of the material, and the shamans represent the world of spirits.  Few, if any, wood elves are drawn to the sorcery of the Eladrin and the other elvish races.  They distrust arcane magic, feeling that it creates destruction.
Wood Elf Racial Traits:
Posted by Elton at Tuesday, March 09, 2010